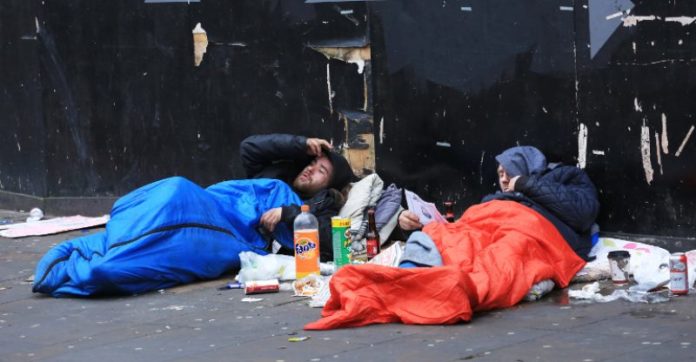 NEW figures reveal hundreds of people previously sleeping rough in Greater Manchester have been helped off the streets and into accommodation as a result of Mayor Andy Burnham’s ambitious drive to tackle the crisis this winter.

And officials believe A Bed Every Night, launched just six weeks ago, now has enough beds in every borough for every person who has been living outdoors.

Even more significantly, 141 of the 456 individuals helped so far have benefitted so much from somewhere safe and warm to sleep every night, plus receiving hot food and targeted support, that they have moved through the system and are now in their own longer-term secure accommodation.

The Mayor said: “It is satisfying to see that A Bed Every Night is making a substantial and significant difference to the lives of some of Greater Manchester’s most vulnerable people.

“To have enough beds in every single borough of our city-region for everyone who wants and needs one is significant progress and it’s a credit to all local councils and volunteers who are making such a success of this on the ground.

“The weather this week has turned wintry, the temperature has dropped. Those 456 people would still be sleeping on our streets at night were it not for our concerted and co-ordinated action and I am proud that A Bed Every Night is working, is making a difference and is ultimately saving lives.”

A Bed Every Night is just the first step in a sustainable model to ensure that those who have been sleeping on our streets are supported every step of the way to help them stabilise then reintegrate into society.

In another significant development, a further 222 people who had been sleeping rough for many years in the city-region have found secure accommodation through the Social Impact Bond (SIB), a programme running alongside A Bed Every Night.

The number of beds available through A Bed Every Night and the variety of support on offer continues to grow, bolstered by the generous donations of the people and businesses of Greater Manchester; the total raised so far surpassed £200,000 in recent days.

The latest accommodation figures were provided by councils from each of the city-region’s 10 boroughs and includes new accommodation which came online in Trafford and Manchester over the first weekend of December.

The night shelter in Trafford has 10 bed spaces available near Pomona, in a supported accommodation scheme run by Great Places.

Cllr Kevin Procter, Trafford Council Executive Member for Communities and Housing, said: “It is heartbreaking when anyone has to sleep rough, all the more so during freezing weather.

“We are delighted to be able to commit to A Bed Every Night and would like to thank our partners – Great Places, Trafford Housing Trust (THT), Irwell Valley Housing Association and Moss Care St Vincent’s – in enabling this to happen.”

Matthew Harrison, CEO of Great Places, added: “Tackling homelessness is high on our agenda as an organisation and being able to help people who don’t have accommodation during the winter is a real privilege.

“Taking action and working in partnership with other organisations across Greater Manchester is the only way we will end rough sleeping and make a significant difference to the those who need their city’s support.”

In the New Year the ground-breaking Housing First pilot, backed by £8 million of Government funding over the next three years, will make available a further 500 homes for people with complex needs, including those previously sleeping rough.