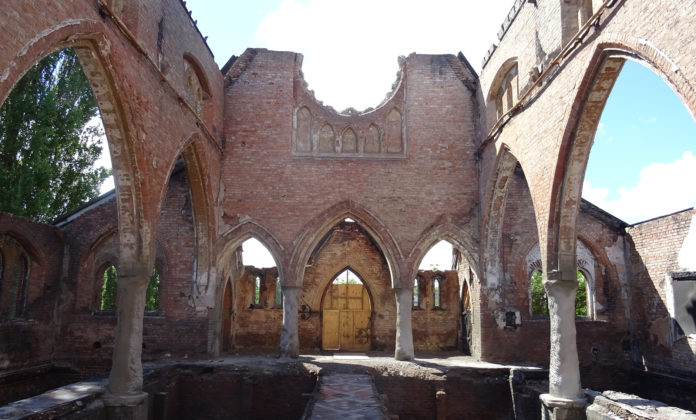 The £5m restoration of an historic church that was destroyed by an arson attack is now underway following a blessing ceremony at the start of the works at the site in Lower Broughton.

The attack on the 149-year-old Church of the Ascension in Salford left the community distraught following a massive fundraising effort for a £250,000 renovation.

Parishioners of the Grade II listed church had raised funds and secured grants with English Heritage and the national lottery over three years for major interior and exterior work to be carried out, including new roofing and pointing.

Now the church, which is a rare remaining example of work by Manchester architect James Medland Taylor, is to rise again and take its place at the heart of the Lower Broughton community in a project that is forecast to complete in 2020.

Community members, parishioners, pupils from the Albion High and River View Primary schools were at the launch with the team which has planned the rebuild led by Canon David Wyatt, as well as the Bishop of Manchester, Rt Revd David Walker.

Canon David Wyatt said: “Today is a significant day in the long history of our church, this really is a very special occasion. Just under two years ago we were left devastated and distraught by the results of the fire, a lot of hard work literally went up in flames. Yet we never gave up hope that our church and its importance to the people here could be restored and this is a day to remember and cherish.

“So much over the years has been taken from Salford and today Salford is being given something back. Today is the start of a very beautiful building being restored for everyone in the city.”

Bolton-based Seddon, which has experience in dealing with historic properties and delivering large complex projects has been appointed for the £2.46m structural works first phase of the project, with the £2.5m interior works to follow.

John Shannon, Director at Seddon, said: “This is a real ‘phoenix from the ashes’ project. This is not only about rebuilding an arson-attacked church, much used and loved by old and young alike, it’s also about the restoration of a community.

“It is they and the church’s Canon Wyatt who have been driving this and we are delighted to be involved in the church’s restoration, to transform it again into a fully accessible place of worship for generations to come.”

The work is being funded through the fire damage insurance facilitated by specialist insurers Ecclesiastical who used drone technology to assist it with the initial assessment of the structure.

Paul Humphris, Specialist Church Claims Consultant at Ecclesiastical, said: “It’s always difficult for a community to see their church in such an awful state and it can be hard to look past the damage caused. However, we have a huge amount of experience in working with churches and understand the complex nature of a restoration of this scale.

“It’s not just the building work that is complex. We’ve been working closely with the church and other interested parties to ensure that the rebuild is undertaken in a way that preserves as much of the history of the church as possible. However, it is also important to consider the current and future needs of the church community; it’s about reaching a solution that works for everyone.”