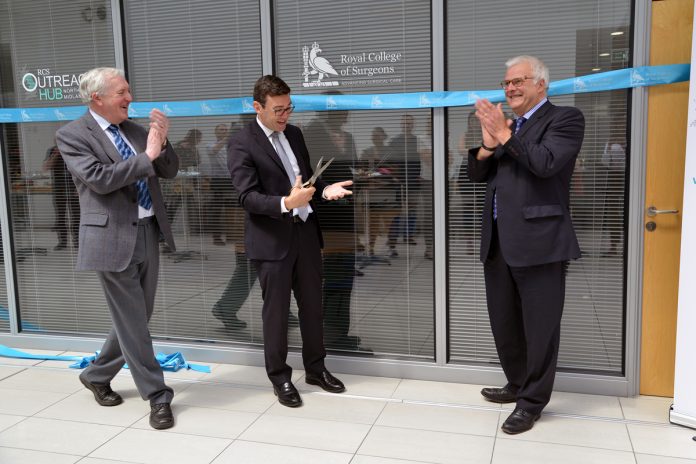 The Mayor of Greater Manchester, Andy Burnham, has officially opened the Royal College of Surgeons’ new Outreach hub at the University of Manchester Innovation Centre today.

The new hub will give the RCS a full-time, staffed presence in the North and Midlands.

The role of the RCS Outreach Hub North and Midlands office is to support members, regional volunteers and surgical societies.  RCS faculty members will also deliver the College’s wide range of educational courses and practical workshops for surgeons and other medical professionals at all stages of their careers, using the state of the art facilities at the Manchester Surgical Skills and Simulation Centre (MSSSC) at the University.

The RCS has listened to the views of it’s over 25,000 members in the UK and internationally, and sought to setup a permanent home for the RCS outside of London, where its headquarters are.

“By establishing a new base in our city and at the University of Manchester in particular, it confirms that Manchester is viewed as a centre of innovation and excellence. We look forward to welcoming the many exceptional surgeons and medical professionals that the Royal College of Surgeons trains and supports to our wonderful city.”

The partnership with the University of Manchester has come about as the RCS embarks on a major redevelopment of its London home, limiting the courses it can provide in its own buildings for the next three years.

The RCS is redeveloping its ‘Barry-designed’ grade II listed building as part of Project Transform, which will see the redeveloped space become a modern and light facility, providing the best education, examination and research resources for the nation’s surgeons. The project will refurbish and maintain the historic façade and library.

The RCS also announced a partnership with St George’s University Hospitals NHS Foundation Trust at the start of this year, enabling its education courses to be delivered at St George’s and establishing a hub for the south of England.

Manchester asks for £16.4m to support its music venues for the next two years