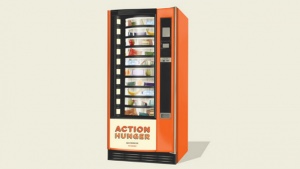 A charity plans to install a machine in Manchester in January for Homeless People to use.

Action Hunger based in Nottingham say that homeless people will be given a key card that can be used with the machine, letting them take three free items each day.

The machine itself will be stocked with things like fresh fruit, sanitary towels, socks, energy bars, and sandwiches. It will be accessible 24/7

The machine is part of a trial that the charity plans to expand nationwide. The first is being launched in Nottingham and there are plans to install a machine in Liverpool and Birmingham, but trustee Huzaifah Khaled emphasised that those plans depend on what happens with the Nottingham machine.

Action Hunger also has plans to install the machines in the US next year, with sites in New York, Seattle, and Los Angeles.

50 per cent of the machine’s stock will come from Action Hunger itself, while the other half will come from supermarket surplus distribution charity FareShare.

Greater Manchester residents have over 1000 green spaces to choose from this National Picnic...