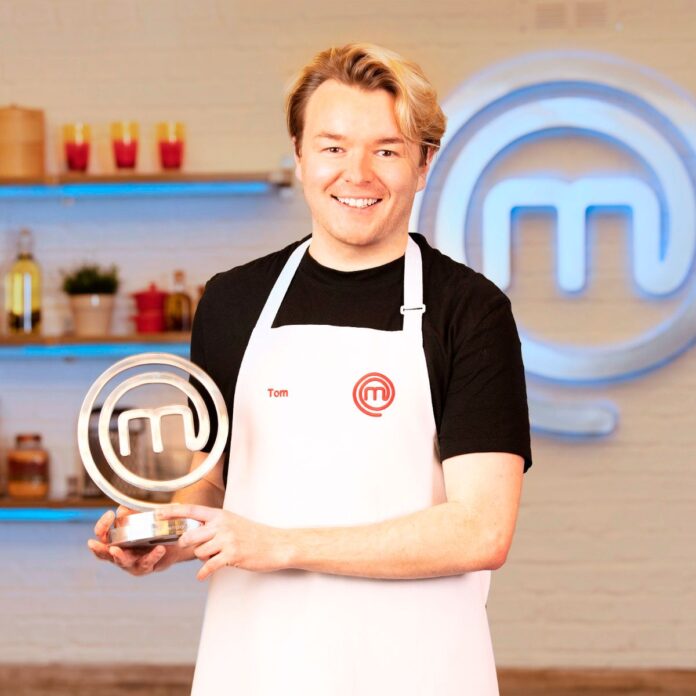 Tom Rhodes, 31, has become BBC One’s MasterChef 2021 Champion and is the 17th amateur cook to claim the prestigious title.

During lockdown the country has been trying out new recipes and cooking at home more than ever before. Against this background and battling against fierce competition from 39 other amateur cooks, through six weeks of culinary challenges and an exhilarating final cook-off, Tom was awarded the MasterChef trophy by judges John Torode and Gregg Wallace.

On his win, Tom says: “From beginning to end, MasterChef is the most incredible experience. Being this year’s MasterChef Champion, after watching and admiring so many past Champions, seems like a dream come true. I’m grateful that I met, got to know and cook alongside some of the most wonderful and talented people, and have found friends for life in them. I’ll also never forget and can’t be more thankful to all the friendly, hard working, fantastic people, that make MasterChef such a special show. I feel this is just the start, and I’m excited for what comes next.”

MasterChef judge, John Torode, comments: “Tom walked into this kitchen and surprised us. He has defined himself a style all of his own and it’s fantastic. His food is delicious and it looks beautiful. As an amateur chef what he is doing is really impressive.”

MasterChef judge, Gregg Wallace, adds: “I love this fella. He has delivered some of the most beautiful, elegant dishes I have seen in this competition for a long while. He is a phenomenal talent and the sky’s the limit for him.”

On his time in the show, Tom says: “I have had a great time in the competition and I have so many great memories. I can’t believe what has just happened, I couldn’t have asked for more. When I came in today I wanted to put up three beautiful plates of food and I have done that. I am so proud of myself and so happy.”

Talking about Tom’s winning menu, Gregg says: “He is at his best when he takes European style dishes and adds Japanese flavours and honestly he produces stunningly good plates of food.”

Tom faced off tough competition in the final week – alongside the incredibly talented Mike Tomkins (27) and Alexina Anatole (30), and Laura Michael (46), who left in last Thrusday’s show. The final four were pushed to show the judges just how much technique, creativity and determination was needed to triumph at the highest level in the grueling last rounds.

In an intense last week, MasterChef viewers have seen Tom take on cooking a five-course lunch at the resplendent Plaisterers’ Hall in the City of London where the diners were 20 members of the hospitality sector who during the first lock down of the pandemic delivered thousands of meals to frontline workers and those most in need. He also headed to Le Gavroche and worked with the two-star Michelin chef Michel Roux Jr where he cooked one of the late Albert Roux’s legendary main courses; roasted filet of veal served with a sweetbread pithivier and a rich bone marrow sauce bercy for guests including MasterChef: The Professionals judge, Monica Galetti; MasterChef: The Professionals Champion 2009 Steve Groves and Michel’s daughter Emily Roux who described the his food as “an impressive dish for an amateur cook”.

The ultimate task was to prepare the best three-course meal of their lives, for MasterChef judges John Torode and Gregg Wallace. Tom’s winning menu started with a trio of oysters one raw oyster topped with apple, cucumber and sake granite, a beer battered oyster with umeboshi mayonnaise and a grilled oyster with miso and seaweed butter topped with a panko crumbs and oyster leaf. On his starter John said: “I absolutely love it, it is about entertaining your pallet, it’s about theatre and I think it’s a revelation”.

His main course was reverse seared rib-eye steak, topped with kombu pickled beetroot, baked beetroot cooked in beef fat, wasabi buttermilk and a watercress puree served with sake and bone marrow sauce. On his main course Gregg said: “It is shockingly modern with the big blocks of colour but I understand it and it’s absolutely fantastic”. To finish his menu Tom served his take on a lemon tart with a short crust case filled with a yuzu citrus cream topped with a black olive meringue and candied yuzu peel served with an olive oil ice cream, olive oil and sea salt flakes. John and Gregg both agreed it was a perfect way to finish off the meal with Gregg describing it as “a work of absolute genius” and John agreeing saying it was “flawless… a joyous dessert”.

Tom has loved being in the kitchen from the age of four although he does admit he wasn’t very proficient at that age. He explains his love of cookery comes from “experimenting with ingredients and flavours, with varying degrees of success! I became more curious and skilled in my teenage years when I started to teach myself to cook properly and would often cook for my parents and their friends. In my teens I became fascinated with mastering classic and modern techniques, loved using kitchen gadgets and learning to make things from scratch. I have continued trying to learn new things, combining this with my interest in East and South East Asian ingredients and flavours.”

On his influences and passions for cooking, Tom says: “I like to be creative and try new flavours and techniques. I learnt a lot about the flavours and ingredients of East and South East Asia whilst travelling and have discovered more through trips to my local Asian markets and through extensive reading.

Tom was born in Manchester and grew up with two younger brothers in Rochdale before moving to Newcastle for university and settling in the city where he now lives and works.

On his future plans, Tom says: “One day I would love to write a cookbook and have a cookery school. During the competition, I have realised my love for developing recipes and cooking for other people outside of my friends and family, so would love to do more of this after the show.

“It would be great to spend time in professional kitchens as even after over 20 years of cooking I know I still have so much to learn. I’d also love to see more of East and South East Asia, to learn more about their food and culture.”

Z-arts turns up the volume on family theatre this autumn