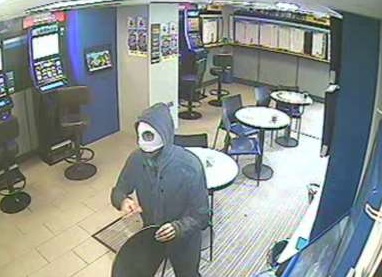 The attempted burglary took place at the William Hill shop on High Street in Lees around 9.40am

A masked man had entered the shop, shouting “give me the money.”

This cashier, terrified, got up to make sure that the door to the counters was locked.At this point, the offender ran out of the shop and escaped through a side alley.

Police have released a CCTV image of a man they wish to speak to in connection with the incident.

Police Constable Zahid Ilyas of GMP’s Oldham Borough, said: “The brazenness of this attempt to steal in broad daylight is unbelievable.

“The assistant was going about their job, only to be met with what must have been a terrifying sight of a masked offender.

“I am asking for anyone who may have seen the man in the image, or recognises the clothing he is wearing to come forward.

“I’d also ask for those in the community who saw anything suspicious at this busy time of the day, to get in touch with police and help with this investigation.”