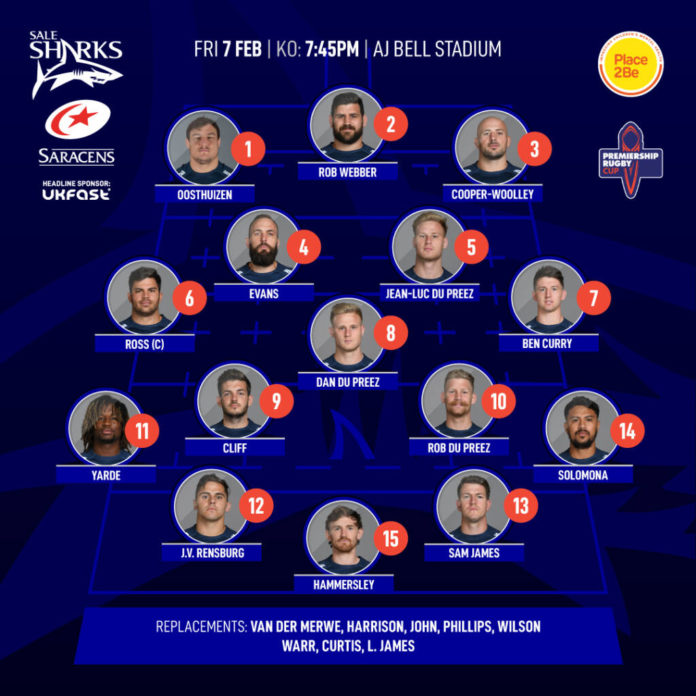 The Sharks Director of Rugby makes three changes to the starting XV that beat Gallagher Premiership leaders Exeter Chiefs at Sandy park almost a fortnight ago.

Coenie Oosthuizen moves into the front row in place of Ross Harrison for the visit of European and domestic champions’ Saracens on Friday, with the Sharks’ most capped player named as a replacement for the Premiership Rugby Cup clash.

Rob Webber and Jake Cooper-Woolley complete the front row with an unchanged lock partnership of Bryn Evans and Jean-Luc du Preez behind them. Jono Ross, Ben Curry and Daniel du Preez make up a familiar back row combination.

Gallagher Premiership Player of the Month nominee Will Cliff retains the number nine shirt after an impressive performance at Sandy Park. The veteran scrum half will line up with fly half Rob du Preez and centres Rohan Janse van Rensburg and Sam James for tomorrow night’s crunch semi-final clash.

Marland Yarde and Denny Solomona replace Byron McGuigan and Chris Ashton in a like for like swap on the wings with Simon Hammersley remaining at full back.

Ross Harrison, Akker van der Merwe and Will-Griff John are all named as forwards on the bench, alongside James Phillips and debutant Mark Wilson.