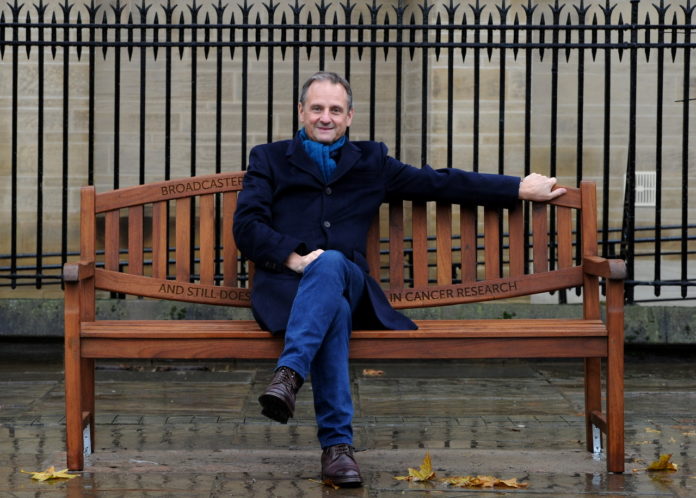 LEGENDARY broadcaster Mark Radcliffe has unveiedl an engraved park bench in his beloved Manchester – but one unlike any other.

In a twist to the ‘in memoriam’ benches that are a familiar site in beauty spots across the country, Mark’s bench attests to his recovery from cancer and salutes the scientists, doctors and nurses who are making game-changing progress in tackling the disease.

The inscription reads: “Mark Radcliffe loved sitting here….and still does thanks to advances in cancer research.”

The bench was revealed to launch the ‘Re-Write Cancer’ campaign – a £20m joint fundraising appeal from Cancer Research UK, The Christie Charitable Fund and The University of Manchester. The campaign aims to help meet the cost of a new £150m cancer research facility. The new building will bring together the largest concentration of scientists, doctors and nurses in Europe to collaborate and accelerate progress for cancer patients.

The world-class facility – due to open in 2022 – will be twice the size of the Paterson building which was extensively damaged by fire in 2017. Adjoining The Christie NHS Foundation Trust, it has been purposefully designed to foster collaboration and speed up progress on behalf of cancer patients in the North West and across the world.

Uniting three powerhouses of innovation – Cancer Research UK – The Christie and The University of Manchester – the flagship project will enable Manchester to lead the world in recruiting patients to clinical trials within a decade, resulting in more patients receiving new cancer treatments leading to improved outcomes and survival rates. Clinical trials are vital to find out if new treatments are safe and better than current treatments.

Mark Radcliffe unveiedl his bench in the grounds of The University of Manchester where he studied in the late 1970s.

He said: “It’s an absolute honour to be involved in the Re-Write Cancer campaign. I loved my years studying at The University of Manchester, so it’s the perfect site for the bench.

“Facing a cancer diagnosis was extremely tough – it completely turned my life upside down and made me re-evaluate what really matters to me. But thousands of people are in the same boat every year and I was fortunate to receive excellent care at The Christie.”

Mark, who now lives in Knutsford, was diagnosed with cancer in 2018. The 61-year-old had a cancerous tumour removed from his tongue. The cancer had also spread to lymph nodes in his neck. Yet following successful treatment, he returned to the airwaves in February of this year.

He added: “Plans for the new research building sound exciting and it’s amazing that such a world-leading facility will be built on my doorstep in the North West. Research into cancer is the key to changing lives now and in the future. Without it I simply wouldn’t be standing – or sitting – here today.”

Construction will take place in the same location as the Paterson building which was home to the Cancer Research UK Manchester Institute and other research teams from The University of Manchester. Although much vital research work was salvaged by courageous firefighters, more than 300 scientists and support staff were displaced and are temporarily relocated 13 miles away at Alderley Park in Cheshire.

The new purpose-built biomedical facility will house several hundred members of staff and attract collaborators from far and wide. Its adjoining of The Christie will enable cells and samples from cancer patients to be taken to the research lab in a matter of minutes – facilitating world leading research which will lead to new cancer treatments.

Manchester is a place of world-firsts in cancer research, including the first clinical use of Tamoxifen for breast cancer and the first single harvest blood stem-cell transplant.

The ‘Re-Write Cancer’ campaign will deliver the remaining funding commitment of £20m needed for the new building, which is expected to open in early 2022.

Benches like Mark’s were also installed in Oldham and Prestwich in tribute to breast cancer survivors Sharon Quennell and Shamilla Mirza.

Cancer Research UK chief executive, Michelle Mitchell said: “As a fellow former student of The University of Manchester and coming from the North West, I’m thrilled at plans for the new research facility. We’re in a ‘golden age’ of cancer research, with survival rates having doubled over the past 40 years. This has largely been driven by improvements in treatments and early diagnosis, but we still have a long way to go in the fight against the disease. By 2030, the building will be at the heart of our ambition to lead the world in clinical trial recruitment – supporting the development of new and kinder cancer therapies.”

Roger Spencer, chief executive at The Christie, said: “This is a hugely exciting time for The Christie and its partners. We have an opportunity to create a truly unique research facility integrated within the hospital with scientists, researchers and consultants all working together in one place, developing and shaping treatment and research from basic scientific discoveries through to patient care. It will ensure our patients receive access to the very latest personalised and innovative cancer treatments alongside world-class clinical and scientific expertise.”