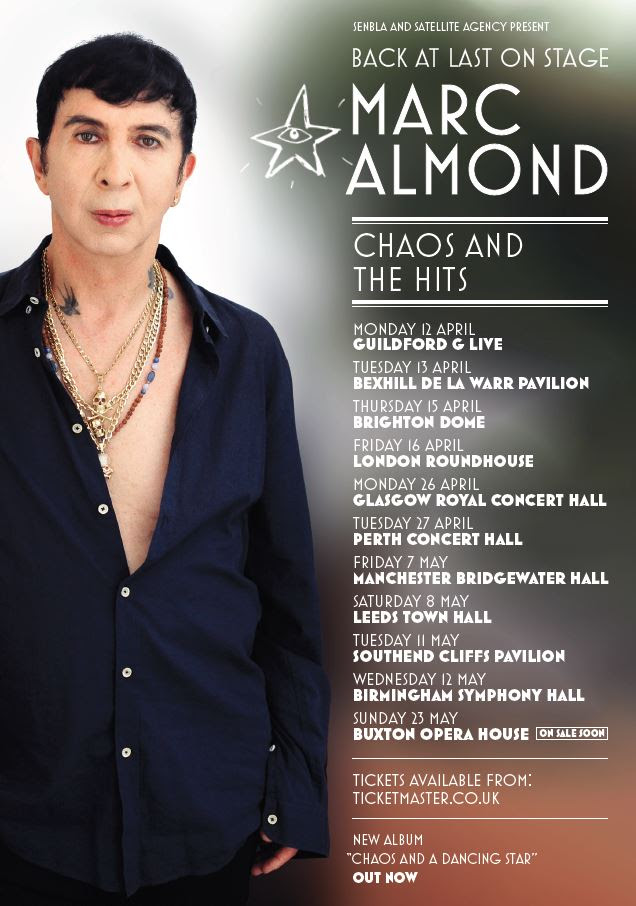 Marc Almond is delighted to announced his first British live tour in nearly two years, Marc Almond In Concert. Marc will be singing songs from his last top 20 album, ‘Chaos and a Dancing Star’, released in March 2020, plus many favourites from his extensive catalogue and his biggest hits. Marc always has surprises up his sleeve.

During the Corona crisis and lockdown Marc performed a series of live online studio concerts which received a fantastic response and worldwide viewing, but he will be happy to be back where he really belongs – in a real concert environment seeing his fans face to face.

His last album ‘Chaos and a Dancing Star’ was released to critical acclaim just before the Pandemic and lockdown. Marc was able to perform a one off concert in February 2020 at the Festival Hall with co-writer Producer Chris Braide, joined by guest Ian Anderson of Jethro Tull. This was recorded for a future Live album release.

Beginning in Guildford, Marc Almond in Concert, will call at Bexhill, Brighton, the London Roundhouse, Glasgow, Perth, Manchester, Leeds, Southend, Birmingham, before finishing up at the Buxton Opera House.

Marc Almond’s lauded career, spanning over four decades, has seen him receive an Ivor Novello Inspiration Award in 2013, as well as an OBE in the 2018 New Year Honours for his services to arts and culture.

Having sold over 30 million records worldwide, Marc Almond has enjoyed both critical and commercial success realising decades of chart dominance. Marc has had International singles and albums chart success with Soft Cell and as a solo Artist covering four decades as well as two number one singles. Tainted Love being one of the biggest selling singles worldwide has influenced and inspired a generation of Artists and Musicians.

The Libertines are heading to Blackpool