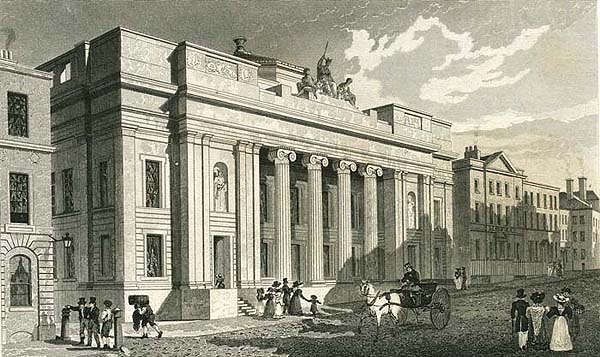 Manchester’s Gothic Town Hall closes this weekend ……but how many people know that the building that was opened in 1877 was not Manchester’s First Town Hall.For that we have to go back another fifty years to King Street.

At the turn of the twentieth century there was much discussion in Manchester about the fate of a building that occupied upper King Street.Its front now smoked stained and its ionic columns fading it was the site of Manchester’s Free Reference Library but behind the doors the building told the story of early municipal Manchester and a link back to the days of Police Commissioners and the Borough reeves.

Work began on Manchester’s first Town Hall in 1822 on the corner of King Street and Cross Street, formerly the site of the house of the eminent Manchester physician Dr White.

Described by Baines as a magnificent building, it was erected at the cost of £40,000 by Francis Goodwin a London Architect, said to have been designed in the style of the Temple of Erectheus in Athens with its dome modelled on the octagonal tower of Andronicus.

At its front were figures representing the commerce and trade of Manchester while in the entrance hall were tow statues, one of Solon and the other of Alfred the Great.

The ground floor was used mainly by the police whilst the second floor which became the Library reading room, was said to be quite an imposing chamber filled with massive fluted pillars and topped with the central dome.

Its construction was begun in the shadow of Peterloo, which had occurred just three years before was nonetheless and the ceremony of the first laying of the foundation stone was mired in controversy as the Manchester Guardian reported with a procession lead by the Sergeants Guard of the First Dragoons who had their swords draw throughout.

The Foundation stone was laid by the Borough-reeve James Brierely and a celebratory dinner was attended in the evening at the Bridgewater Arms.

In 1830 Mr Aglio added frescoes to the internal decoration of the hall. One in celebration of the defeat of Napoleon, others representing Manchester’s connection to Trade. Lord MacCartney meeting the Emperor of China, Sebastian Cabot landed on the coast of America and the King of Persia receiving a deputation from England.

There was also a depiction of the expedition of Jason and the Argonauts, said to have taken place in 1263 BC. With Manchester incorporation in 1838, a staircase and entrance hall was added but even by this time with the town growing, the Town Hall was becoming unfit for purpose.

The last meeting of the City Council before they moved into their new accommodation at Albert Square, was in January 1877, but in its brief history as a Town Hall, the King Street site had seen many momentous events, a visit from Queen Victoria, forty thousand people filing past the coffin of John Dalton and many meetings involving the anti Corn Law League.