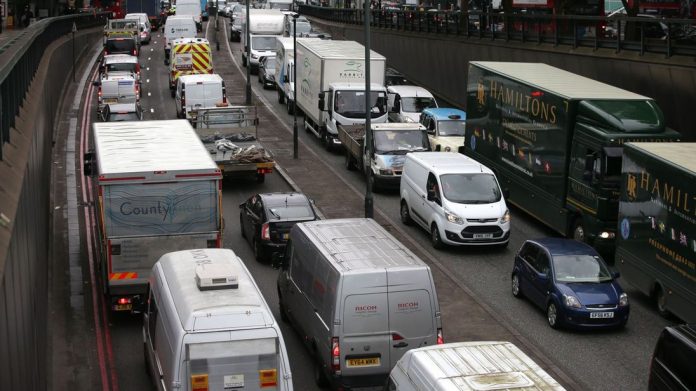 Manchester suffers the worst congestion of anywhere outside London, according to a new league table released today by the National Infrastructure Commission.

While the capital still sees more traffic congestion than any other area of the country, Manchester tops the league outside London, with Liverpool second and Birmingham in third place.

Rounding off the top 10 are cities from across England – one is in Yorkshire, two are in the East Midlands, while a further two cities are in the South West, and two spots are filled by cities in the wider South East.

In fact, the first area of the country to appear on the league table that is not a city is the area of Accrington and Rossendale – appearing at number 26.  All other spots above that are filled by cities.

To achieve this, the National Infrastructure Assessment – the first of its kind for the UK – includes recommendations that greater powers be devolved to metro mayors and local leaders to improve urban transport, backed by £43 billion funding to 2040 on top of current spending plans.

Sir John has written to leaders in over 50 cities across England – including these most congested cities – offering support from the Commission as they develop their own integrated plans to improve local transport, unlock employment opportunities and deliver new homes.

As part of this, the Commission plans to work directly with a small number of cities, while at the same time ensuring that lessons learned are shared with other areas.

“From Manchester to Bournemouth our cities are facing gridlock – creating misery for people trying to get from A to B.  Trying to tackle this from London won’t work. Our metro mayors and city leaders need to be in the driving seat to develop local solutions.

“In our National Infrastructure Assessment – the first of its kind for the UK – we’ve called for powers and increased funding to be devolved from Whitehall to local leaders.  This will give the people who know their cities best the tools they need to improve urban transport and support the delivery of new employment opportunities and homes.

“This offers the best chance for our cities to reach their full potential while remaining vibrant and exciting places for people to live and work, and so I’ve offered the support of my Commission to help local leaders pull together plans to do just that.”

“Today’s league table demonstrates the challenge our city leaders face in tackling congestion to keep traffic moving on their streets.

“We must now give them the powers and funding they need to support long-term strategies to tackle this issue, which would also be designed to boost job opportunities and deliver new homes.”

In developing today’s league table of the most congested areas of England outside London, the Commission compared the ease with which people could drive from one part of an area to another at peak and off-peak times.

A key recommendation from the Assessment is that by 2021, metro mayors and local leaders should develop and implement long-term and integrated strategies for improving local transport and employment opportunities, and the delivery of new homes to support the growth of their cities.

This would also require Ministers to devolve powers to local leaders to deliver them – including giving metro mayors the ability to make decisions on major housing development sites, and devolved transport budgets for all cities, which would mean regular, direct funding allocations from Government, guaranteed through new legislation.

On top of this, the National Infrastructure Assessment recommends that the Government agree significant new funding for major infrastructure programmes in the fastest-growing and most congested cities – which could include some of the top 10 making the league table today.

Taken together, major cities would benefit from a £43 billion boost in funding up to 2040, on top of current spending levels, which fits within the clear remit set by the Government for 1.2 per cent of GDP being invested in infrastructure.