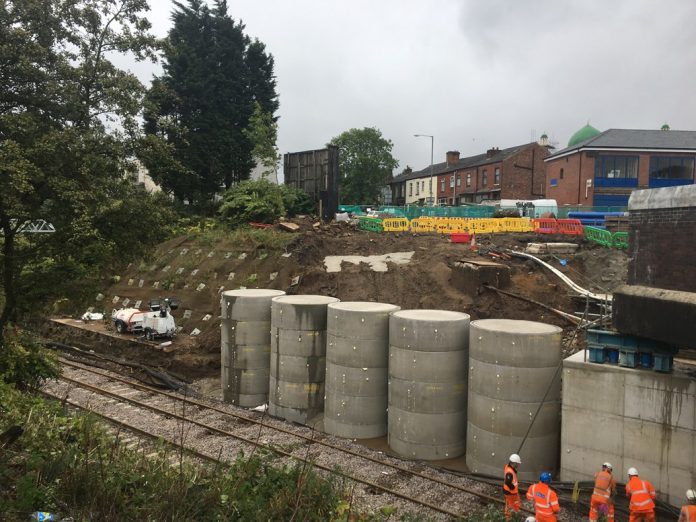 Passengers can travel by train between Bolton and Manchester again after the line reopened early following emergency repairs to a bridge which was badly damaged by a burst water main.

The Moses Gate railway bridge, near Bolton, was damaged on 17 August when the burst pipe caused a section of it to collapse onto the railway below and created a hole in the road above.

The line through the area fully reopened today (6 September) however, due to recent wet weather which has delayed some work, Moses Gate station will be closed until later in the week while work continues to complete upgrades as part of the electrification of the line.

Andy Morgan, senior sponsor for Network Rail, said: “This has been an extremely challenging repair programme and we have been working 24/7 to get passengers moving between Bolton and Manchester.  To repair the bridge, we have rebuilt a large section of wall which supports the bridge and make it stronger.

“We have been working at Moses Gate station to make sure it is ready for electric trains to run.  However, due to the recent wet weather, it has slowed progress meaning the station will be temporarily closed until later in the week.

“I would like to thank all passengers for their patience during this complex situation.”

Liam Sumpter, Northern regional director, said:  “We look forward to welcoming customers back to Bolton from Wednesday as we restart our full train service for journeys into Manchester.

“We want to thank all of our customers for their help and understanding over the last week.”

Before the water main burst, the railway through the area was already closed because of upgrade work at Bolton station as part of the Great North Rail Project. The station and railway between Bolton and Manchester was due to open on Monday 28 August. The work at the station – which included remodelling of the tracks, station platforms and signalling systems – was completed on time as planned and is part of plans to upgrade and electrify the railway to provide passengers with better, more reliable trains.