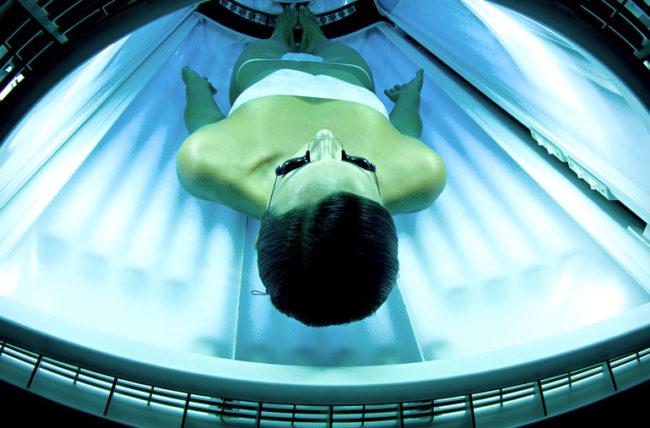 A ban of commercially available indoor tanning would substantially reduce deaths from melanomathe most serious form of skin cancer, a study led by University of Manchester researchers has concluded.

The study findings are being published to coincide with Melanoma Awareness Month.

By tracking the projected impact on the 618,000 18-year-olds living in England in 2019, the research team showed that a ban on indoor tanning would result in 1,206 fewer cases of melanoma and 207 fewer melanoma deaths over their lifetimes .

In addition, it would result in 3,987 fewer cases of other more common types of skin cancer (squamous cell and basal cell carcinomas) which impose a major burden on both affected patients and the NHS.

The study, funded by the Manchester Cancer Research Centre, brought together a multidisciplinary team needed to address the financial, social and clinical aspects of the skin cancer project.

The study, published in the British Journal of Dermatology, also examined the costs of a public information campaign at the same time as the ban, and the potential savings to the NHS.

And the policy would also save the NHS £700,000 resulting in a Net Monetary Benefit of £10.6m with a 99% likelihood that the ban with the information campaign would be cost-effective.

The actual impact of an indoor tanning ban, and the savings to the NHS that would accrue, would be far greater when benefits to individuals that started to use sunbeds over the age of 18 years were also factored in.

The results build on previous studies of the effect of similar legislation on healthcare in North America, Europe and Australia and add to the growing body of evidence supporting a total ban on commercial sunbeds.

Despite some evidence of decreasing use, the practice of indoor tanning is still widespread in many countries including the UK.

In England, sunbed use is especially high in the north-west and in cities with greater social deprivation; its popularity is thought to partly explain the unusually high rates of melanoma seen among young women living in the north-west..

It is also estimated there are around 62,000 children under 18 currently using sunbeds in England.

Paul Lorigan, a Professor of Oncology at The University of Manchester and Honorary Consultant Medical Oncologist at the Christie NHS Foundation Trust said: “If the NHS invested in a public health campaign to support the ban on sunbeds, we estimate that melanoma and other skin cancers would be significantly reduced, NHS resources would be saved and deaths averted.

“It is quite clear that melanoma and keratinocyte skin cancers have a significant impact on population health and healthcare budgets, and that a proportion are attributable to indoor tanning. Anyone who has used a sunbed increases their risk of melanoma by almost 60% .

“We show quite conclusively for the first time that banning indoor tanning supported by a public health campaign would be an efficient use of healthcare resources to reduce melanoma and other skin cancers in England.

“Our findings agree with calculations of future productivity losses that were caused by these diseases in the USA in mainly young people in 2015 after exposure to tanning devices. There the total economic losses amounted to over $US127 billion over the individuals’ lifetimes.”

The team analysed the cost-effectiveness of the policy on the NHS using modelling to track the national cohort of 18-year-olds over their lifetimes.

And they calculated the expected costs, Quality Adjusted Life Years and the Net Monetary Benefit of a ban.

Professor Adele Green from The University of Manchester and the CRUK Manchester Institute added: “We already know that indoor tanning devices are strongly linked to melanoma and other skin cancers with resulting morbidity, mortality and increased healthcare costs.

“But policy-makers require robust economic evidence to inform decisions about a possible ban of such devices to mitigate these burdens. We feel we have succeeded in providing that evidence.”

Susanna Daniels, CEO at Melanoma Focus said: “This research is further evidence of the negative public health impact of sunbeds. I am thrilled that Melanoma Focus are supporting this project by funding the validation of UK costs of the melanoma diagnostic and treatment pathway.

“For individuals, sunbed use dramatically increases the risk of developing melanoma which is the deadliest form of skin cancer. The rates of melanoma skin cancer are increasing in the UK yet 86% of cases are preventable. We strongly advise the avoidance of sunbeds.”

Gary Lipman, Chairman of The Sunbed Association, which represents professional sunbed salon operators throughout the UK and Ireland said:

“It is just far too simplistic, in fact I would go as far as to say disingenuous, to suggest a ban on sunbeds would have any impact on melanoma rates in England, especially because outdoor intermittent sunburn is epidemic in this country and researchers know this is the real problem.
“We utterly refute the mathematically theoretical claims made in this study, not least because it relies heavily on data from studies conducted outside of the UK where the sunbed industry is not as well-regulated as it is here. But unequivocally, there is no reliable evidence that responsible non-burning use of a professionally operated sunbed by someone who can tan, will increase their risk of melanoma.

“Countless public information sun awareness campaigns over the last three decades costing the public purse many millions of pounds have unfortunately done little to change the public’s behaviour towards sun exposure. Often adopting campaigns from countries such as Australia where the sun is so much stronger than in the UK, has had little, if any impact, leaving the public confused and disengaged with the messaging.

You only have to look at the many tens of thousands of burned Brits on holiday every single year to realise that. The British Association of Dermatologists published research which showed that 72% of the UK population they surveyed admitted burning in the sun at least once in a previous 12-month period. I am not aware of anywhere else in the world that has sunburn statistics as high as these.

“It is over exposure to sunlight and burning that is an increased risk factor for melanoma, not tanning. A tanning session in a professional sunbed salon in England uses sunbeds that are designed to comply with a British Standard that dramatically reduces any risk of burning and customers are screened by well-trained staff to check for any contra-indications to tanning. A 10 minute-session on a professional compliant sunbed is the equivalent of 10 minutes in the Mediterranean summer sun.

“A 2021 US Center for Disease Control-authored study omitted from the Manchester University study looked at the contexts in which adult sunburns occur. It reported that 19 out of 20 sunburns take place in situations where the individual isn’t even trying to get a suntan and most participants (79.6%) reported they were using sun protection in natural sunlight when their most recent sunburn occurred.
“Only 0.6% of participants reported their most recent sunburn was from a sunbed and the majority of those were almost certainly non-salon sunbeds. Professional sunbeds are not the problem.

“The Sunbed Association and its members promote responsible tanning by people able to tan. Our members are a well-trained, professional and desired presence on most local high streets promoting responsible tanning. The majority of our members are single site owner operators working extremely hard in their own businesses caring for consumers. They offer regular employment and in many instances to mums with young children, working shifts during school hours, bringing much needed income to the household.”

Focus on COVID-19 deaths in under-65’s for better insights into infection rates across populations,...

Breast cancer bus to hit the streets of Greater Manchester