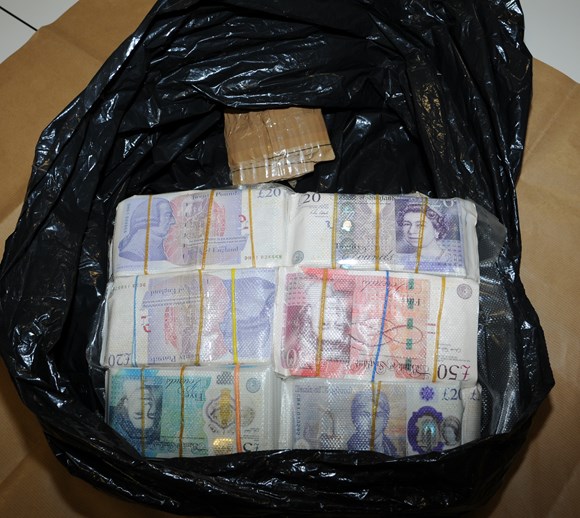 Almost £14m has been recovered from criminals by Greater Manchester Police’s Economic Crime Unit in the past 12 months.

The money is made up from £3.7m from Confiscation Orders following the criminal conviction of offenders – up by 81%
£6.6m in cash seizures (up 326%) and £155,000 of seized listed assets (watches and precious metals etc)

£3.2m has been recovered by the new Account Freezing Order Team from accounts frozen due to their suspected use in crime

Detective Chief Inspector Joseph Harrop said: “A notable seizure arose from the arrest of Sean Doyle as part of Operation Lushan, a 16-month investigation that formed part of the UK-wide Venetic operation focusing on the take down of the encrypted communications service Encrochat.

“During his arrest, Doyle stashed cash in a bag for life and threw this out of his bathroom window onto the roof. This was quickly recovered by officers and amounted to over £365,000.

“Doyle was jailed for seven years in October 2021 after pleading guilty to conspiracy to supply cocaine and heroin, possession of criminal property and money laundering and a total of £367,870 was forfeited from him.

“Additional cash seizures included £98,000 forfeited from a man who recently pleaded guilty to drugs and money laundering offences with the cash was found in a holdall during his arrest.

“And a further £76,415 was recovered from an abandoned vehicle during a police pursuit.”

In total, £5.7m will be returned to GMP as part of the Asset Recovery Incentivisation Scheme (ARIS) and can be used for community programmes and charities across the region, as well as funding policing programmes and operations to further fight crime.

DCI Harrop added: “This has been a record year for asset recovery for GMP and we are one of the leading forces in the UK and that has resulted from a more proactive approach.

“We will continue to use more innovative and proactive ways to find and recover these assets.

“We are committed to tackling organised crime in all its guises and stripping assets from criminals.

“We have three new, highly skilled teams committed to asset recovery – the Confiscation and Restraint Unit, the Asset Detention and Recovery Unit and the Account Freezing Order Team.

“These teams will hunt for and recover assets however they are hidden.

“We also have a new Money Laundering Team that will identify, investigate and prosecute all those involved in trying to launder criminal proceeds.

“Half of the money forfeited goes automatically to the Greater Manchester Police ARIS fund used for charities and community initiatives.

“I would appeal from information from the public about anyone they suspect to be living a criminally-funded lifestyle and have hidden assets so we can deprive them of their cash and use it for a better purpose.”

#GreenSalford celebrated in a series of films