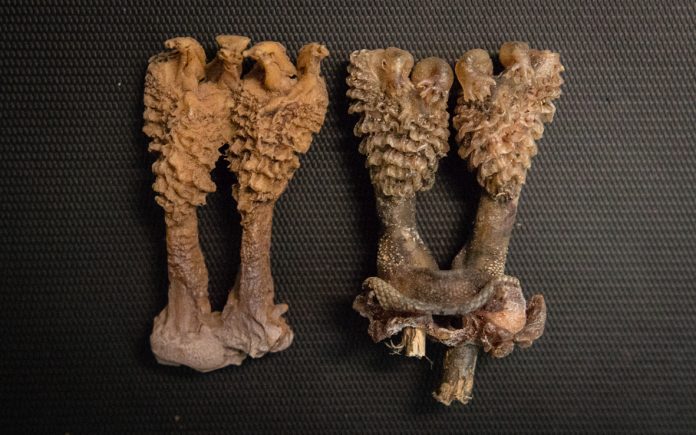 Scientists from Manchester Metropolitan University have found online customers looking for a rare plant root used in Tantric medicine are being duped into buying an unusual counterfeit – lookalike lizard penises.

Tantric practitioners strongly believe that, if appropriately energised by a guru, Hatha Jodi can change a person’s life by bringing immense wealth and happiness.

Found only in remote areas of Nepal and central India, the plant root is marketed as a good luck charm and is thought to ward off evil spirits.

People from the Asian diaspora living in UK, USA and Europe who order what they believe is Hatha Jodi from sellers via major internet retailers such as Amazon, Ebay and Alibaba are being sent the apparently similar-looking dried genitalia of a monitor lizard, known as the hemipenes, instead.

Laboratory tests were conducted on samples by scientists at Manchester Metropolitan University and their results have been corroborated by colleagues in India, confirming a widespread international fraud.

Dr David Megson, a Lecturer at Manchester Metropolitan University who specialises in environmental forensics, said: “Given the photos being advertised online, we needed to get into the laboratory to confirm our suspicions that that these dried ‘plant roots’ were in fact derived from Indian monitor lizards.

“However, the plot thickened even further when tests revealed that some of these items contain parts that are acrylic plastic resin moulded in the form of Hatha Jodi.”

The monitor lizard is a protected species and any trade involving it or its body parts is a national offence under Indian law. Both the Bengal and yellow monitor lizard are also listed under the Convention on the International Trade in Endangered Species of Flora and Fauna – the highest level of international legal protection that can be afforded and that prohibits commercial trade.

The monitor lizards are being illegally poached from the wild, caught in traps and snares.

Some will have their throats slit or their skulls smashed in before their genitals are removed for use as ‘Hatha Jodi’ and others will still be alive when this process begins.

Lead scientist Dr Neil D’Cruze, of World Animal Protection, who asked the Manchester Metropolitan University team to analyse the samples, said: “We were shocked at the sheer audacity and scale of this illegal wildlife trade.

“These illegal items are readily available in the UK and USA with potential street value of £50,000.”

In a recent wildlife trade enforcement raid a haul of 210 Hatha Jodi, including hemipenes from Bengal and Yellow monitor Lizards, were seized from a house in Bhubaneswar – capital of the Odisha state in eastern India – by a joint team of the Wildlife Trust of India and federal Wildlife Crime Control Bureau, Crime Branch of State Police and the Forest department.

The price of these illegal items was stated to range from £5 to £50 each with the price dictated by their size.

There have been further raids in the states of Andhra Pradesh, Madhya Pradesh, Gujarat and Rajasthan.

Researcher Aniruddha Mookerjee, working with University of Oxford’s Wildlife Conservation and Research Unit, said: “This international illegal trade is of major concern for the continued survival of the lizard species involved.

“Both Bengal and Yellow Monitor lizards are protected under Indian and international law.

“But even a quick search reveals hundreds of items on sale, sometimes at prices over £200 apiece.

“If left unchecked, this demand could grow to the extent that it pushes some wild populations over the edge.”

World Animal Protection is approaching all major international online retailers, requesting that they remove all illegal monitor lizard body parts – currently being sold as ‘Hatha Jodi’ – from their websites.

How a student can learn to read quickly and effectively?