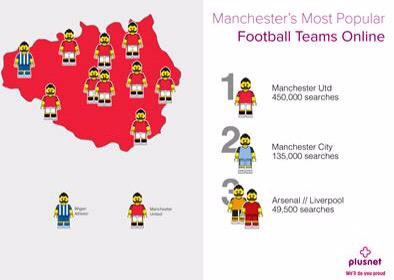 Broadband provider Plusnet wanted to find out where in the UK holds the most loyal hometown fans. Using Google keyword tool data, they tracked how many supporters came from the local area.

We all know Man United holds the big guns when it comes to overall support, but taking them aside, which town is actually loyal to their club?

Swansea City came a close second, with 45.5% of searches for its area, and Newcastle United was third with 42.4%.

Charlton Athletic, Brentford, and Barnet were found as the least loyal, all garnering less than 1% of Greater London searches.

The analysis also looked into the highest searched teams in each county and found that those situated in the West of England are firmly behind Manchester United.

Even with some isolated exceptions, the vast majority of the west of the UK put Manchester United on top. This potentially shows that the common misconception that Manchester United fans hail from the south east may not be entirely accurate. In the east, things are far more diversified, with large areas showing support for Newcastle United, Leeds United, Arsenal, and West Ham.

All other counties supported either Arsenal or Manchester United the most. Manchester United have established themselves as a globally recognised team, with Premier League championship dominance during the 1990s–2000s, and titles in 2011 and 2013. Arsenal, likewise, are an attractive Premier League team thanks to finishing in the top five of the league table every season since 1995–96.

More recent champions, such as Manchester City, Chelsea, and the 2016 champions Leicester City, made much less of an impact. Manchester City peaked at the number two spot in the Greater Manchester area, and the Foxes, whilst understandably being the most popular in their home county, found nearby Rutland much harder to conquer with as many people searching for Arsenal. This means that, even after their improbable Premier League win, Leicester City are still competing to be the most searched for team in their area.

Review of the Year December