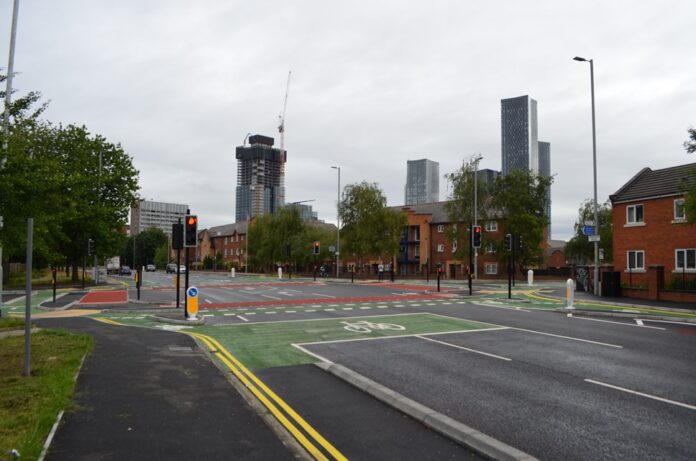 The UK‘s first CYCLOPS (Cycle Optimised Protected Signals) junction has been launched in Hulme.  The unique design separates pedestrians and cyclists from traffic, reducing the possibility of collisions or conflict.

The CYCLOPS junction has been designed to fully segregate cyclists from general traffic, improving safety for all road users. Pedestrians are also able to get where they want to be in fewer stages with more space to wait than on other junction designs.

Installed as part of the Manchester to Chorlton cycling and walking route, the first-of-its-kind-junction will act as a blueprint for future junctions as part of Greater Manchester’s Bee Network, an 1,800 mile joined-up walking and cycling network, connecting every community across the city-region. The next CYCLOPS on the ground will be at Newport Street by Bolton Station and over 30 others are in development across the 10 GM districts. The design has been lauded by experts nationally and internationally, with the approach being adopted in Cambridge, Lancashire and even Ottawa in Canada.

Chris Boardman, cycling and walking commissioner for Greater Manchester said, “Crossing busy junctions on foot or by bike can be a complicated and scary experience and is often a huge barrier for people travelling by foot or bike, and having to navigate a number of these can make them opt for the car.

“Particularly right now, as we’ve seen cycling trips up by 34% and cycling and walking trips now counting for 33% of all journeys in Greater Manchester, this junction design will make journeys easier and smoother for those doing their bit by cycling or walking, without impacting negatively on any other modes. This design is simply genius and I’m not surprised to see other places already adopting the approach.”

This new approach to junction design was developed by TfGM’s traffic engineers and walking and cycling team in response to some of the flaws in existing UK junction designs, whilst also considering how to make the junction work for all modes.

CYCLOPS designers, TfGM Engineers Richard Butler and Jonathan Salter said, “The main difference between this junction and traditional UK junction designs is that cyclists are offered an alternative safer route around the junction.. They are no longer required to position themselves  on the nearside of the lane, allowing vehicles to pass on their offside which is often the cause of so-called ‘left hook’ incidents, where cyclists going ahead are struck by a vehicle turning left from the same lane.

“The CYCLOPS resolves this with its ‘external orbital cycle route’ which separates cyclists from motor traffic. Bicycles approaching from all four ‘arms’ can use the cycle track which encircles the junction to make left, ahead and right turning movements safely protected from traffic”.

Salford Family Orchestra is back and wants you!