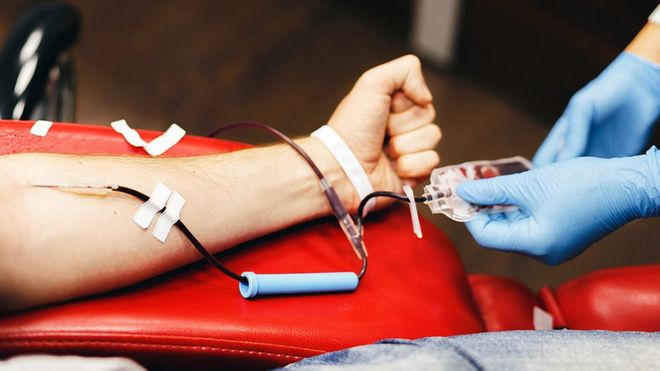 A new survey from NHS Blood and Transplant reveals that fear of needles is the primary reason for deterring men across the UK from giving blood (18%), with 15% of all respondents in Manchester agreeing that this prevents them from donating.

The survey, which polled 2,000 adults, was conducted to help highlight a current imbalance between male and female donors. Last year, only 37% of new donor recruits in 2018 were male. To help get the right balance, NHSBT wants to get 25,000 new male donors over the next five months.

Mancunians admit to being deterred from giving blood due to being afraid of fainting during the process (15%), and over a tenth (15%) claim they would be more afraid of donating blood than getting a sporting injury

There’s also a lack of knowledge around how long it takes to donate a unit of blood; over one in 10 (15%) locals are completely unsure of how long it takes to donate, and almost a third (30%) think the donation time is up to three times as long as it actually is. The actual donation itself usually takes around 5-10 minutes; not even the full quota of half time in a rugby game. The whole process, from arriving for your appointment to tea and biscuits, takes under an hour.

The survey reveals that 61% of men in the UK say they watch up to five hours of sport a week, which equates to 260 hours per year dedicated to viewing. If just four of those hours were spent giving blood each year, each of those men could save or improve up to 12 lives in 12 months.

Men are particularly important donors, as they make up most long-term blood donors. They are more likely to have lots of iron, so can donate more regularly than women. Men’s blood can also be more easily used for platelets, which are used to treat people in emergencies when they are bleeding a lot. Conversely, women often have breaks in donation due to pregnancy.

The BT Sport partnership – during which viewers will enjoy a range of advertising and content around blood donation over the course of six months – are rugby legends and TV pundits including Ugo Monye, Lawrence Dallaglio, Ben Kay, Martin Bayfield and Austin Healy, who will support the campaign on and off screen until April 2020.

“Currently around two thirds of all new donors are women. We need to encourage more men to come forward to donate. Their donations can be used to make life-saving products from their plasma and platelets, used to save victims of burns, car crashes and treat to patients with cancer.

“If you think of how many hours a week we spend watching sport, some of this time could be put to even better use – you could register to become a blood donor and make a difference.”

“We need nearly 400 new, first time blood donors every day and we particularly need more men to donate blood. Men’s blood can more easily be used to stop bleeding from surgery or injuries.

We want to assure those who are wary of the process that it’s quick and the needle just feels like a ‘sharp scratch’. If you eat and drink before you donate, you don’t need to worry about fainting. Plus, there are always expert nurses on hand to make you feel comfortable.

He added: “Partnering with BT Sport for their 2019/20 Rugby coverage provides us with the perfect opportunity to engage with a male audience and communicate the need for male donors on a trusted platform that is recognised and respected.

“If you are aged 17 or over, please visit www.blood.co.uk to register to donate and make an appointment to donate and help us save lives.”

The local donor centres for Manchester are located at:

A brand new Ziferblat has opened in Manchester