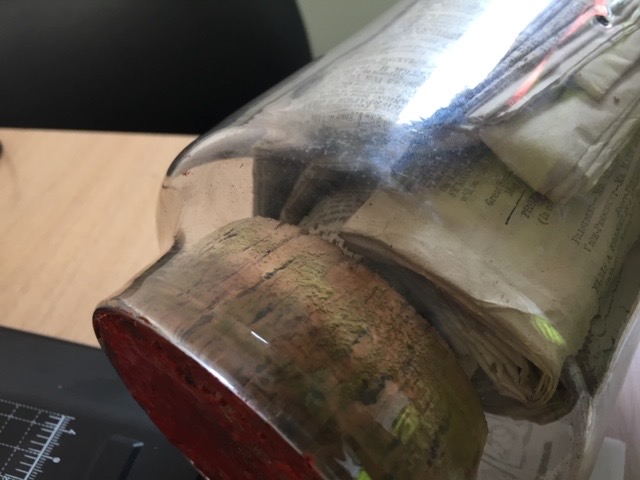 As building work on Manchester Jewish Museum’s major Cultural Capital Development project nears completion ready for its Spring 2021 opening – builders have made an astonishing discovery of a time capsule hidden in the historic synagogue’s walls.

The glass jar, complete with its wax seal intact, was discovered by a builder hidden deep in a wall cavity next to the Museum’s Ark (the holy cupboard which houses the Torah Scrolls). Filled with money, synagogue papers and newspapers, these original artefacts are dated from around the time when the synagogue was first founded in 1873. Early synagogue minutes show records of the capsule being laid in the cornerstone of the original building.

Manchester Jewish Museum CEO Max Dunbar comments “This timely discovery comes at an apt and symbolic period when millions of Jewish people around the world prepare for the holiest day of the Jewish calendar, the Day of Atonement, a reflective and thoughtful time of year when many observers look backwards as a means to move forwards. We are thrilled and overwhelmed by its discovery and look forward to showing it off in our collection when we re-open next Spring.”

The item will become part of the museum’s permanent collection of over 31,000 objects – including a Russian washboard used as a cricket bat, an English/Hebrew teapot and the belongings of a Holocaust Survivor who spent the war hiding in a coal cellar. It is through the collection of these special and hugely eclectic objects, that Manchester Jewish Museum – the only one outside of London – is able to share and connect the rich and remarkable story of Manchester Jewry to society and the world at large: Showing that their story is a universal one – one of identity, belonging and assimilation.

When Manchester Jewish Museum reopens its doors next Spring, it will house a brand new gallery, learning studio, learning kitchen, café and shop – all built in an extension alongside the existing historic building. The Grade II* listed synagogue – located in the city’s culturally diverse Cheetham Hill district – is also being repaired and restored. Regular live events, workshops and discussions will run across a packed and eclectic year- round programme.

No link between Covid jab and risk of miscarriage says regulator

Seven jailed over supply of shotgun and ammunition to criminal gang