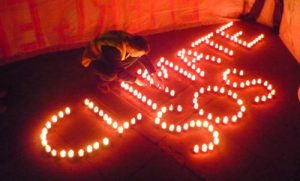 A motion asking Manchester City Council to formally declare a ‘climate emergency’ will be heard at a meeting of all 96 councillors today.

The motion asks members to agree that climate change is a serious risk to Manchester’s future and commit to embedding the issue as an integral part of council decision-making – making sure that all key decisions are taken with the city’s target of becoming zero-carbon by 2038 in mind.

It also calls on the government to bring forward new funding and devolve powers to help make the zero-carbon target a reality, while hastening the transition to a zero-carbon economy, accelerating the reduction of carbon emissions from aviation and decarbonising the national electricity grid.

Members of Manchester’s Youth Council will make a presentation at the meeting, to represent the city’s young people and encourage councillors to pass the motion on their behalf.

The action comes in the same week as a Young People’s Climate Action Summit, which is being held at the Whitworth on Friday.

The Summit, which has been organised with support from the Manchester Climate Change Agency and the Council, will give children from schools across the city the opportunity to express their views on how climate change should be tackled and challenge councillors on the actions they are taking to ensure that the city meets its ambitious 2038 zero-carbon target.

The council approved the 2038 target on behalf of the city in November 2018.  It is underpinned by research carried out by the world-renowned Tyndall Centre for Climate Change, based at the University of Manchester.

The science-based target, recommended by the Tyndall Centre and Manchester Climate Change Agency, includes a commitment to releasing a maximum of 15 million tonnes of CO2 from 2018-2100.  With carbon currently being released at a rate of 2 million tonnes per year, Manchester’s ‘carbon budget’ will run out in 2025, unless urgent action is taken.

Manchester City Council’s latest Climate Change report, set to be published later in the month, will show that the Council’s own emissions have reduced by nearly half from 2009/10 levels.  This has been achieved through a programme of installing new LED street lighting, a major carbon reduction programme to lower emissions from the council’s corporate estate, plus the gradual decarbonisation of the national energy mix.

Meanwhile, Manchester Climate Change Agency is developing a new framework for the city, which will be published by March 2020 and will set out the initial phase of activity required to progress towards zero-carbon status by 2038.

Areas for action in the draft Framework include improving the energy efficiency of local homes; generating more renewable energy to power buildings; creating well-connected cycling and walking routes, public transport networks and electric vehicle charging infrastructure; plus the development of a ‘circular economy’, in which sustainable and renewable materials are reused and recycled as much as possible.  Sixty ‘pioneer’ organisations have so far signed up to play their part in meeting the zero carbon goal.

Manchester City Council’s Executive Member for the Environment, Planning and Transport, Councillor Angeliki Stogia, said: “We welcome this motion, which has been brought following the passionate response of young people in Manchester to the threat of climate breakdown.

“As a council, we can and will play our part in making sure that the city becomes carbon-neutral by 2038 and I’m proud that so far, we are exceeding our internal carbon reduction targets.  But we cannot do it on our own.  We need people and organisations from every part of the city to come together and do their bit to make a zero-carbon Manchester a reality.

“Our young people’s energy, commitment and ideas will help to drive the changes we need to see and make sure the city they inherit is a sustainable, cleaner, greener and healthier place for them to be truly proud of.”