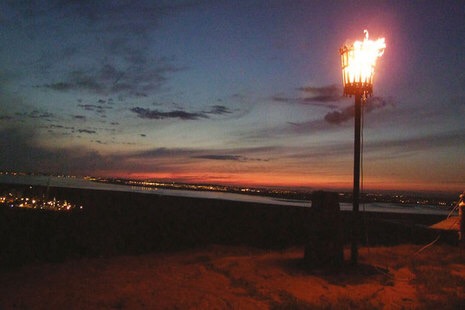 Manchester Cathedral to light special beacon to mark the 70th anniversary of Victory in Europe Day.

Manchester will celebrate anniversary of Victory in Europe Day on the evening of Friday 8 May.

At 3pm a two minute silence will be observed across the city to commemorate the anniversary, the start and end of which will be marked by the firing of a maroon from Manchester Town Hall.

Over 200 Beacons will be lit throughout the United Kingdom, Channel Islands and Isle of Man, following the lighting of the Principal Beacon outside Windsor Castle by Her Majesty The Queen.  A beacon will be lit at Manchester Cathedral to mark the start of a week of celebrations, and all those who took part in the Second World War in Europe, both on the Home Front and overseas. We will light our beacon from the South Turret of Manchester Cathedral at 9.32pm having gathered for a time of prayer and vigil in the cathedral at 9pm. All are welcome to join us for both the prayer vigil service and the lighting of the beacon.

“Manchester Cathedral suffered damage from German bombs during the Second World War when the north east section of the Cathedral was destroyed.  Photographs of the bombing are on display in the Regiment Chapel and it was this bombing that is depicted in the Fire Window in this chapel.  The window is a powerful reminder of the bombing and also a testament to members of the regiment who lost their lives defending the nation.  It is therefore very poignant that the beacon marking the 70th anniversary of VE Day is being lit at the Cathedral on Friday 8 May as we give thanks to God for the victory in Europe.  May we continue to work for a world where justice and peace is preserved and celebrated”.