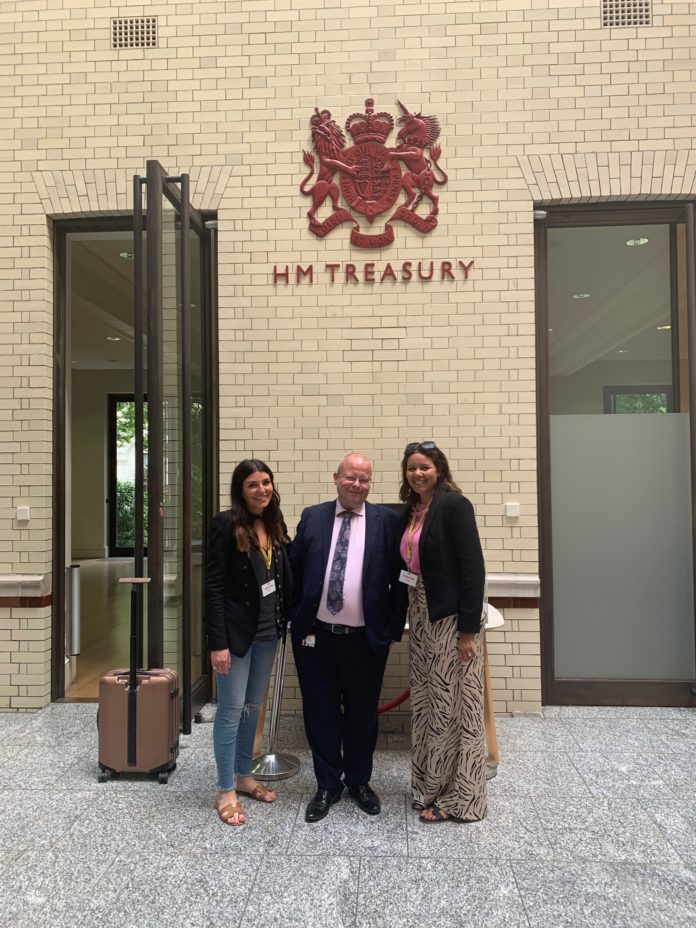 Women’s charity Elle For Elle has received praise in Westminster for giving the nation’s most vulnerable women ‘moments of dignity’.

Rachel O’Hare and Lynette Page-Collin, Elle For Elle founders, met the cabinet minister at the cabinet offices in Westminster, to talk about the issues of debt with vulnerable domestic abuse victims and how it can lead to domestic abuse in all forms.

Debt and financial abuse are two of the biggest yet most unknown symptoms of domestic abuse, according to Elle For Elle.

Lynette Page-Collin said: “The meeting was a real chance to talk to the government about one of the most worrying aspects of domestic abuse – how, when a domestic abuse victim enters a refuge, they’re in arrears from leaving their home behind, from partners using their credit, known and unknown, to themselves.

Elle For Elle’s work often centres around simply giving vulnerable women in refuges cosmetics donated to them during their campaigns. The charity aims to raise awareness for the plight of the 3,660 women housed in women’s refuges throughout the UK, many of whom have little or no access to toiletries and sanitary products. Elle For Elle aim to change that.

“It’s incredible what a difference a lipstick and a little make-up can make to these vulnerable women,” said Lynette.

“it’s such a simple mechanic but has large and long-lasting results in terms of improving their self-confidence. This, in turn, can help them get back into employment, and start the journey to standing on their own two feet again.”

After meeting Elle For Elle, Steve Coppard said: “The government made a commitment to help the most vulnerable indebted people through its recent Joint Statement on Fairness with the advice sector.

“The work that Elle for Elle does not only provides moments of dignity for those in desperate situations, but also starts to expose some of the more challenging elements of life in a women’s refuge, including the vulnerable position that survivors of economic abuse find themselves in, especially in relation to moving forward into their own homes with the added stresses of debt arrears.”

Lynette and Rachel chatted in-depth to Steve Coppard about the struggle vulnerable women and girls go through during and after domestic abuse and highlighted their constant fight for survival not only physically but emotionally and mentally too.

Lynette said: “Steve was very welcoming and open to our ideas and will continue to support Elle for Elle on our mission to help the future of domestic abuse survivors

“We’d like to push this with our campaign Be.You.ty which sees us putting women and girls through beauty training to have a skill to earn from and educate themselves in.”

Rachel O’Hare added: “Most of the women who are forced to use refuges arrive with nothing, often fleeing from domestic abuse with small children. Having to ask for a tooth-brush or sanitary wear is the last bit of dignity that these women may lose.

“Our campaign ‘Dignity after Distress’ is helping vulnerable women maintain some dignity by keeping the bathrooms and cupboards of refuges stocked up with beauty products so that they can at least take a hot shower and use some decent products whilst keeping personal hygiene private without feeling more degraded.”

Elle For Elle already has lots of support for its crucial work, including help from international companies like Boohoo and Eurocamp and from celebrities and famous faces, like the stars of Coronation street, supporting the charity’s work.

Elle For Elle donate to women’s refuges directly, which is so important to us as products are never filtered down.

To date Elle For Elle has donated well over 20,000 cosmetic products to vulnerable women around the UK.