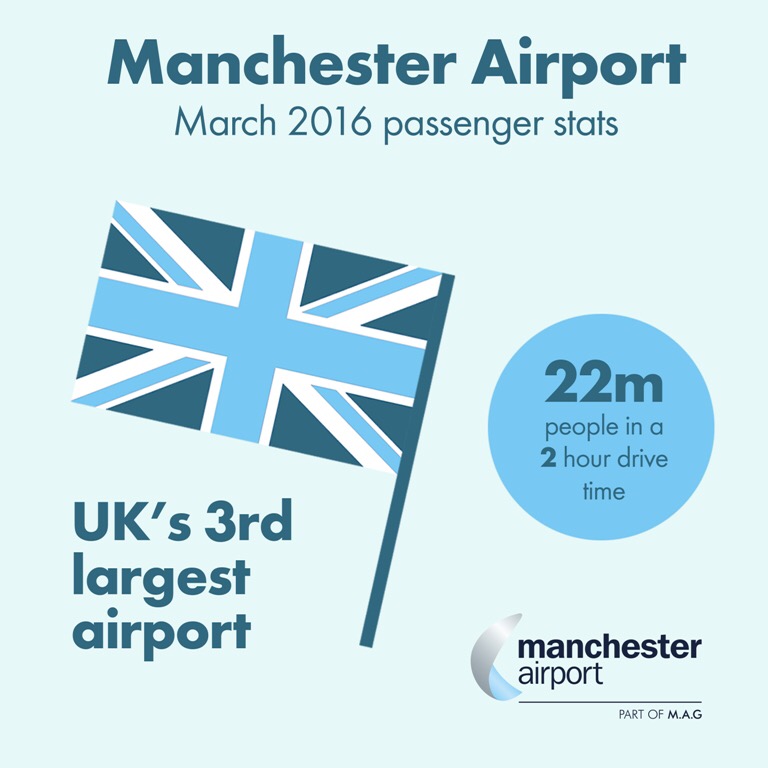 In the last financial year (2015/16) Manchester Airport flew more passengers than ever before in its 78 year history with 23.5m people picking the North’s international gateway.

Traffic numbers for March 2016 were 11% up year on year, with 1.74m people jetting off on holiday and on business. The top five popular international routes last month were, Dubai, Dublin, Amsterdam, Tenerife and Alicante.

Aircraft movements in and out of Manchester were also up last month by 883, with 13,736 planes taking off and landing on the airport’s two full length runways.

There are over 22m people in the airport’s catchment area, which spans as far north as Scotland, as south as the West Midlands, east across Yorkshire and west to Merseyside and North Wales. The continued increase is testament to the fact people within the catchment area want to fly from the North, avoiding unnecessary connections at more congested airports in the South.

A wealth of new routes, plus increased frequency and capacity on existing routes is feeding the growth at Manchester Airport. The airport continues to add to its long haul portfolio and in the last year has added a range of new routes, which outside of London can only be found at Manchester.

“The continued strong growth at Manchester Airport is incredibly positive and benefits not only the airport and our passengers, but the entire region.

“As new routes come to fruition and passenger numbers increase, in turn jobs are created and inbound tourism spend is injected into the region.

“Manchester Airport currently generates £1.7bn in value for the North West, supports 21,500 jobs on site and a further 45,000 indirectly and we are confident of driving more growth in the years to come.

“As we move into the summer season, we look forward to a host of new long haul routes starting, which will give our passengers more choice than ever before.
“This financial year, we will see services to Beijing, with Hainan Airlines plus Los Angeles and Boston, with Thomas Cook, begin. Plus next financial year San Francisco and Boston, with Virgin Atlantic, will launch.

“Such services are sure to prove popular with leisure travellers, as well as delivering a boost to businesses wanting access to these key markets and, as the year progresses, we look forward to securing yet more vital routes for passengers across the North.”