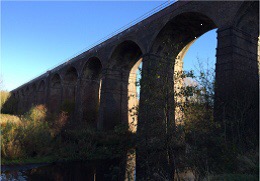 The Hope Valley line between Sheffield and Manchester reopened today  after Network Rail completed vital restoration work to protect Reddish viaduct for the next century.

A nine day closure of the Hope Valley line (2 April – 11 April) from Ashburys to Romiley and Marple Wharf Junction to New Mills Central allowed Network Rail’s ‘orange army’ to completely remove the railway track and ballast – the foundation stones which supports the tracks – and place a special waterproof system with new drainage along the viaduct before relaying the track ready for trains to run.

Engineers worked day and night to complete the vital refurbishments, including strengthening work to repair and stabilise the main supporting columns on each of the four corners of the viaduct to strengthen and protect the structure for many years to come.

Network Rail worked closely with Northern – which operates services on the affected lines – throughout the project to keep passengers moving. Where possible train services were diverted and rail replacement services replaced some services.

Mark Ashton, Network Rail’s scheme project manager, said: “The Reddish viaduct is stunning and the work we completed over the past nine days means that it will remain that way for another century.
“Closing the line for this extended period maximised the work we could do, cut down on disruption to passengers and was a much more efficient way of working, saving significant amounts of taxpayers’ money.

“I appreciate this closure caused some disruption for passengers and I would like to thank them for their patience while we worked to protect this structure, keeping an iconic landmark safe and providing a better railway for the thousands of passengers and businesses who rely on it each day.”

The 16 span Reddish viaduct was built in 1875 and carries the rail line over the River Tame and Reddish Vale Country Park. A local legend states that during construction a local witch cursed the viaduct and anyone who counted the number of arches.

A care home resident in Gatley has become among the first people the...