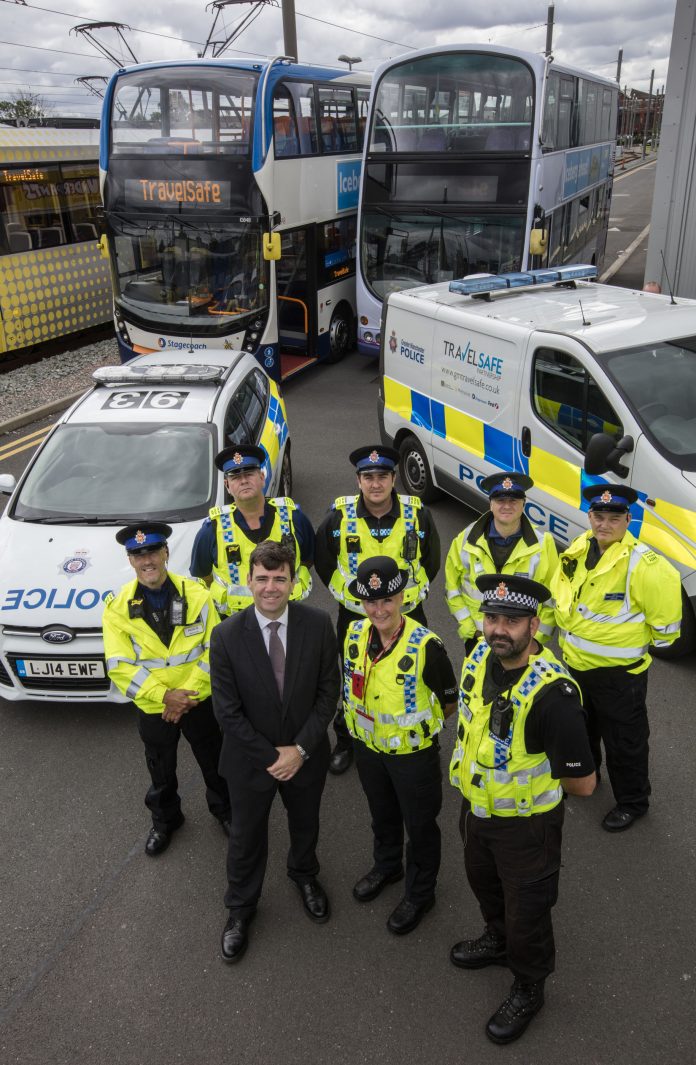 The TravelSafe Partnership (TSP), a multi-agency approach set up to tackle and reduce crime and anti-social behaviour (ASB) on the region’s bus and tram networks, is set to be bolstered by dozens more officers, with an increased staff presence particularly in the evening and at weekends.

The new Metrolink operator, KeolisAmey, will introduce 900 hours per week of additional security support onto the tram network when they take over the running of the UK’s largest light rail system from tomorrow, Saturday 15 July.

This equates to 24 new TravelSafe Officers (TSOs) who are Security Industry Authority accredited.

From Monday (17 July), the first of 50 new Police Community Support Officers (PCSOs) which are joining the TSP will begin their dedicated patrolling of the transport network. They’ll be further supported by a new police sergeant and four police constables.

“I promised to prioritise a greater staffing presence on our public transport in the evenings and early mornings and today we are delivering on that promise. This announcement marks not only an investment in the safety of the network, but a clear move towards promoting Greater Manchester as a great place to visit and supporting our thriving nightlife.”

The TSP uses intelligence and crime and ASB data from contributing operators to help target patrols in the necessary areas at key times.

As well as undertaking dedicated and intelligence-led operations, the TSP will continue its programme of engagement with the community to tackle and understand the issues and root causes of ASB – which impacts public transport as much as anything else where it is prevalent.

Incidents of crime and ASB continue to be rare on the region’s buses and trams, when you consider approximately 206 million journeys were made on the bus network and 37 million on Metrolink in Greater Manchester in 2016.

“The introduction of the TravelSafe PCSOs enhances our existing team, which includes an inspector, sergeant and police constables.

“It means that there will be staff dedicated to ensuring the safety of transport users, which will be a welcoming sight to everyone who uses the bus and tram network.

“The PCSOs will be working alongside colleagues within the travel networks in addition to colleagues at Greater Manchester Police to deter criminality and to deal with any incidents that can affect public safety.”

The TSP is split into four units, each responsible for one of four geographical areas. This means members of the team become familiar with recurring issues and hotspot areas, not only on the transport networks but within the wider community in the areas they serve.

The enhancement to the unit underpins the partnership’s commitment to ensuring the safety and wellbeing of the travelling public, deterring and reducing incidents of crime and ASB and removing barriers that might otherwise discourage people from using public transport.

Operations Director at Stagecoach Manchester, Matt Kitchin, said: “The TravelSafe Partnership is a great example of how transport operators, Transport for Greater Manchester and Greater Manchester Police are working together effectively to tackle and reduce crime and anti-social behaviour on public transport.

“Safety is our number one priority and while instances of crime and ASB on our buses are low, the TravelSafe Partnership provides a reassuring presence for our customers and the extra officers and PCSOs are a welcome addition to the team.”

Adrian Worsfold, Operations Director at First Manchester, said: “The safety of our customers and staff is of the utmost importance and we welcome the additional TravelSafe Officers to our Greater Manchester bus services.

“As a result of the TravelSafe Partnership we have already seen the positive impact that the presence of security officers can bring to our services, as we work together to reduce anti-social behaviour.”

Aline Frantzen, Managing Director for KeolisAmey Metrolink (KAM), said: “One of KAM’s key commitments is to visibly enhance safety and security on our network to help improve the customer experience. We are pleased to be working with our colleagues in the TravelSafe Partnership, with the deployment of our new TravelSafe Officers to help keep Greater Manchester moving.”

Grace Gets in a Spin for Hospital Helipad Appeal