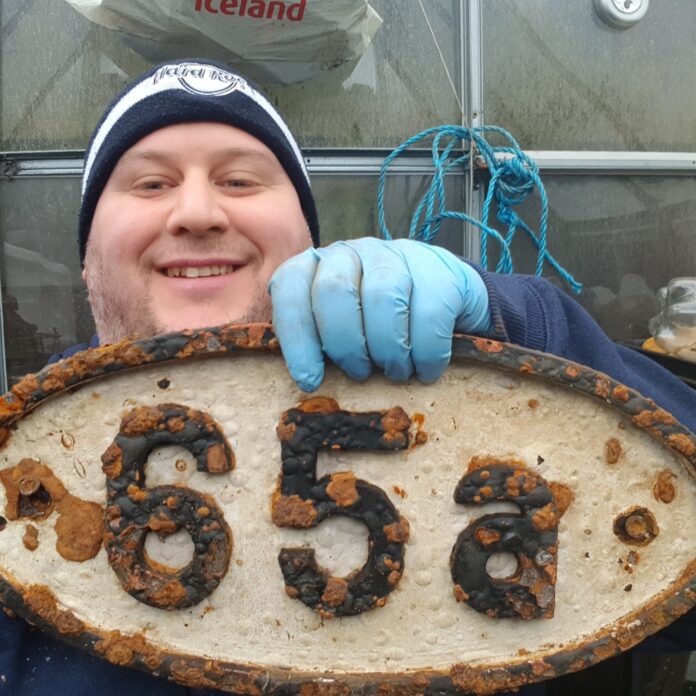 He’s found buried ‘treasure’ and reunited owners with stolen possessions he’s recovered at the bottom of local canals – now magnet fisherman Scott Bryant is inviting fans of the hobby to join him at a 24-hour magnet fishathon for Help for Heroes.

Scott from Rochdale will be casting a hefty rope tied to his 500kg magnet into Piccadilly Basin in Manchester city centre from 12pm this Saturday until noon on Sunday and is excited about the ‘treats’ he and everyone else will find.

Since he started nearly three years ago, his unusual catches include a victory medal dating back to World War One as well as a crossbow, bikes and a machete.

With some detective work, he has also managed to hand back some of his precious finds to their rightful owners. A safe stolen during an armed robbery more than a decade ago containing watches, jewellery and a driving licence was traced back through social media.
And when he opened a pillowcase pulled to the surface of the water from the Rochdale canal it revealed stolen jewellery along with a USB stick and an engraved mirror, given as a 50th birthday present.

On the USB stick were some photos of a woman celebrating her milestone birthday by climbing the Sydney Harbour Bridge in Australia so, knowing it was a long shot, Scott contacted the iconic landmark and they identified the mystery lady – who lived just 25 miles away from him. “She was blown away to get the items back as they were very sentimental,” Scott said proudly.

His stepson Matthew first introduced him to magnet fishing and Scott, 41, known as ‘Scotty B’ now regularly films his expeditions which also feature his wife Pauline, aka ‘Mrs B’, Steven Cottam and Marc Brownbill for their successful Patriot Magnets’ YouTube channel. They now have a collection of magnet strengths bought from Magnet Store in the North-West with the most powerful weighing 500kg.

“My favourite all-time find was a machine gun from World War One and the items I’d most like to uncover is a sword and a bayonet. Magnet fishing is like digging through history. Under the murky water there’s another world which we get to reveal. The strongest magnets can pick up items which are buried deep in the silt which have lay hidden for years. When the magnet finds something, it clicks onto and you can physically feel the vibration. It’s a thrilling hobby and that’s what keeps me going back to it – it’s like a treasure trove down there,” explained Scott, a mental health care assistant in a secure intensive care unit.

“My shifts at work can be challenging so there’s nothing better than going to the canal a couple of hours to relax, chat to the inquisitive passer-by and enjoy the fresh air – I definitely think it’s good for my own mental health.

“I’ve been desperate to hold this 24-hour magnet fishing event but it’s had to be cancelled twice due to the pandemic so we are thrilled it’s going ahead at last,” explained Scott. As well as collecting donations at the 24-hour magnet fishathon, he is also holding a raffle and is taking on a 100-miles in September challenge for the military charity.

Help for Heroes relies on the generosity of the public for the majority of its funding and saw a loss of approximately 75 per cent to its income from national collections during 2020 as a result of the pandemic.

At the same time, during the first lockdown the charity saw a 33 per cent increase in those coming forward for mental health support compared to the previous year.
“Help for Heroes provides physical, psychological, financial and welfare support to wounded, injured and sick service personnel and veterans, and their families. Help for Heroes is a charity close to my heart, I know people who’ve served in the military and continue to serve their country and this is the least we can do,” Scott added.

Rebuild of LGBT Centre on Sidney Street set to go ahead