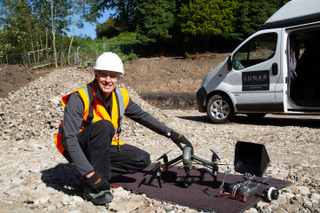 Bollington drone company Lunar Aerial Imaging is set to capture footage and stills even closer to people, buildings and vehicles having been awarded enhanced permission to fly commercially by the Civil Aviation Authority (CAA).

This non-standard permission has so far been granted to only a small number of professional drone companies and commercial pilots have to prove  to the CAA that they have exceptional skills and experience to fly safely in difficult environments.

LUNAR provides the add on drone service to television and film production houses and will now be able to get even closer to the action. The new CAA permission also allows them to operate much closer to large gatherings such as festival crowds and sports events, getting as close as 75m, when previously it was 150m.

LUNAR works with a range of corporate clients in the property and construction sectors and the new licence means they can capture aerial images of property developments in the heart of the city centre, flying closer than before. LUNAR’s drones have filmed still and moving images of site progress and images for major developments in the North West  including Manchester’s Owen Street Towers, The Residence, and Manchester Airport Group.

Lunar’s MD and chief pilot Greg Chivers said “We can now operate in spaces and places which up until now have been excluded by the CAA’s guidelines. Our new permission gives us and our clients more freedom to get video and photographs in built up and populated areas. it’s a great asset for LUNAR Aerial Imaging, we love an aerial city scape and we are looking forward to discovering more viewpoints this will enable us to do.”

Greg Chivers and Jinny Chivers set up LUNAR in 2015, and now operate with a team of eight. With over 500 commercial hours logged, Greg has developed an expertise of flying and filming in complex environments including airports, city centres, indoors and enclosed spaces, sea operations, the tracking of vehicles, and night filming.

Their drone of choice is the DJI Inspire 2 with advanced safety features, changeable lenses and cinematic quality images. It can fly as fast as 90km/h proven to be useful for getting dynamic shots of planes landing at Manchester Airport.

Greg Chivers added: “The drone we have has geo-fencing which acts like a virtual safety barrier and is a key feature for getting this special permission.  It is great that drone technology has developed so that professional drone pilots can now use the technical features to safely film in built up areas and events.”

Fears for House of Fraser as Chinese backers