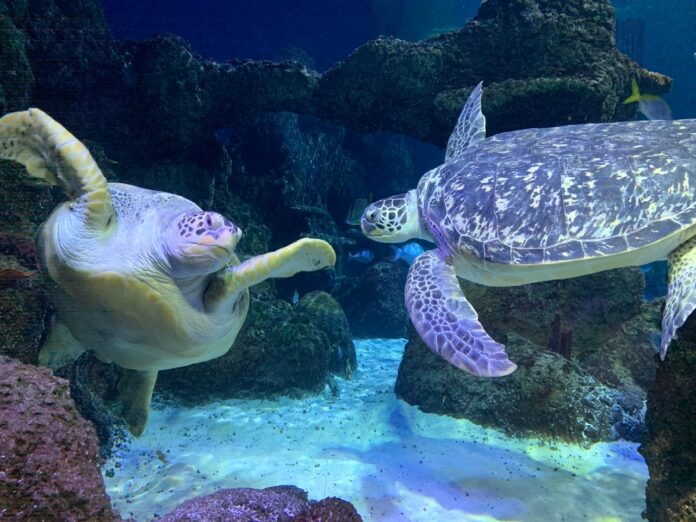 The turtles, two of the leading attraction’s star creatures, were introduced in August 2017, with the hope that they would one day breed.

All was looking promising with the pair establishing an immediate bond and blossoming relationship; that was until lockdown. Over the last 18 weeks, the pair have found themselves in troubled water, with the much-loved turtles displaying a clear change in behaviour and 19-year-old Cammy rejecting all of Ernie’s advances.

In frustration toy-boy turtle Ernie, aged 17, has been observed behaving over amorously with the rocks within the centre’s 500,000 litre ocean tank.

Tired of Ernie’s persistent advances Cammy has been seen to repeatedly snub her love-struck suitor, nipping at Ernie who has displayed bite marks on the back of his neck, marks usually found on a female during mating.

Keen to bring an end to the duo’s quarrels, Sea Life’s specialist creature welfare team and resident deep-sea love doctors have waded in with a series of measures to help reignite the turtles’ passion for one another. Amongst the tactics are socially distanced date nights, with the turtles’ favorite meal of Brussel sprouts, cauliflower and broccoli served at a distance to help prevent the duo from bickering over their favourite morsels; the introduction of more toys to encourage play, including frozen blocks of ice; and an increased number of enrichment techniques including relaxing shell brushes to assist in reducing tension levels.

“The change in Cammy and Ernie’s behavior is quite significant,” said Senior Curator at Sea Life Manchester, Brendan Malone.

“When the pair were first introduced some three years ago, we had high hopes they would form a close bond. It is advised that all our female turtles are, where possible, kept with males to reduce the chance of them becoming egg bound.

“Since lockdown commenced however, our expert creature welfare team, which has been in the aquarium daily caring for all our creatures’ needs, has noted a distinct change in activity including clear displays of standoff-ish behaviour from Cammy, and Ernie getting a little frisky with the rocks.

“There are a number of potential reasons for this as both creatures reach their sexual maturity, with the absence of visitors and guest interaction also believed to have contributed. Cammy & Ernie are both big show-offs and love the attention they receive from guests. Recent weeks have however seen Cammy retreat with Ernie going from being her number one playmate and partner in crime to number one annoyance, not unlike some human relationships!

“We’re pleased to share that as guests return to the attraction and interact with the two, we’re starting to see a return to normal behaviour and have high hopes they’ll rekindle their love. In the event this doesn’t happen however we will have to consider our wider options including a potential trial separation.”

Cammy was first brought to Sea Life Manchester in 2017 as a mate for resident turtle Ernie with the pair quickly becoming a star attraction. With both creatures reaching sexual maturity it was hoped that they would exhibit breeding behavior and help avoid Cammy becoming egg bound. Their behaviour will continue to be closely monitored over the immediate coming weeks when it is hoped the continued return of visitors to Sea Life Manchester and increase in guest interaction will see normal behaviour resume.

One of the largest species of sea turtles in the world, weighing up to 700 pounds, the turtles are protected from exploitation in most countries. Human activity is the greatest danger to green sea turtles with pollution indirectly harming turtles at both population and individual scales. Many sadly die as a result of being caught in fishing nets with real estate development a cause of habitat loss as nesting beaches are eroded. Green sea turtles can live up to 80 years.

Sea Life Manchester reopened on July 4th with the strictest safety measures in place, inviting guests to return to its magical underwater world.  Advance booking is essential and can be made at https://www.visitsealife.com/manchester/tickets/.