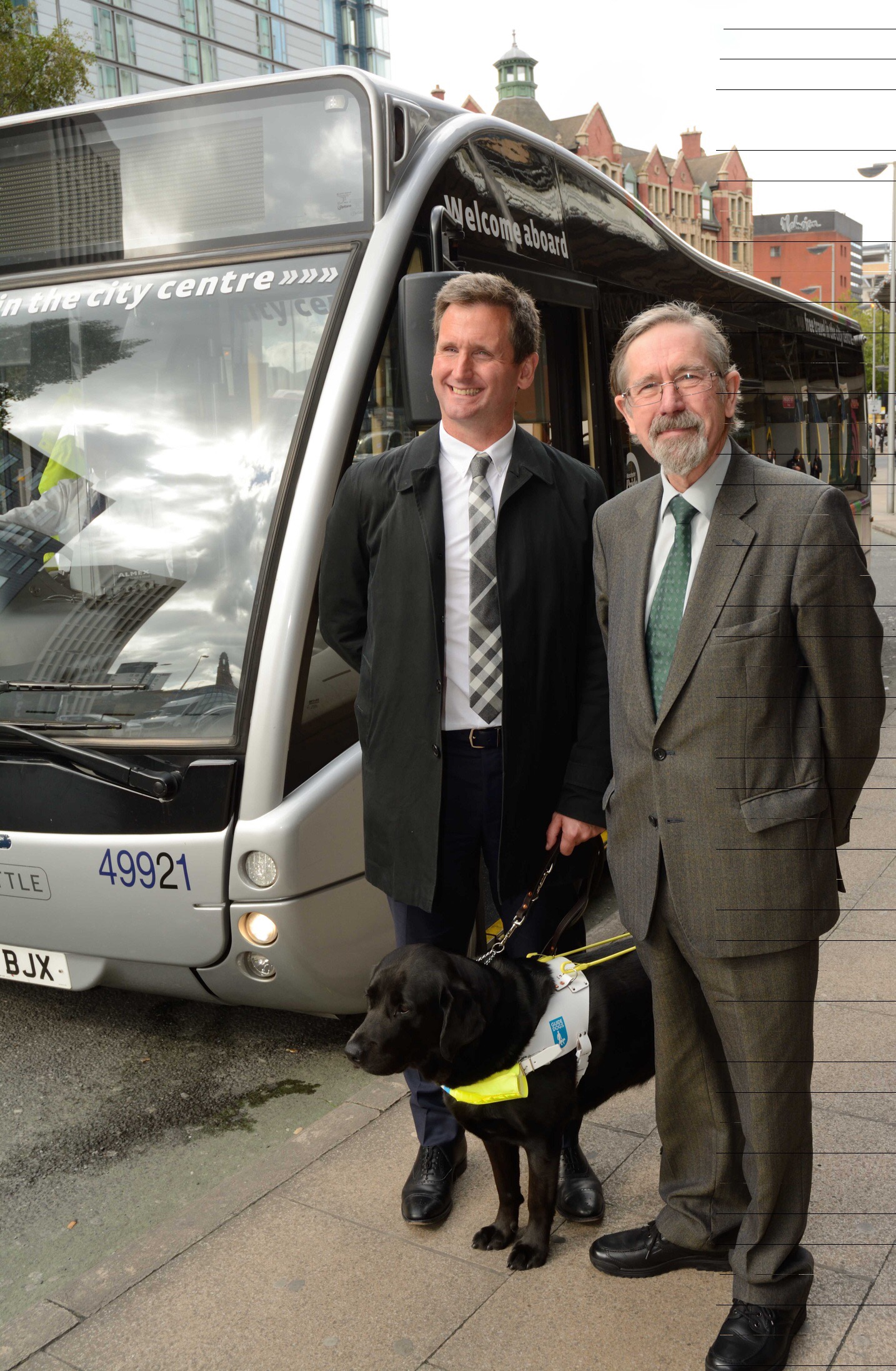 Lord Holmes of Richmond MBE, one of Britain’s most successful Paralympic swimmers and lifelong campaigner for equality and inclusion, joined transport bosses this week to formally launch new equipment on Manchester’s free Metroshuttle service.
The low-carbon fleet is owned by Transport for Greater Manchester (TfGM) and operated by First Manchester, with three circular routes covering the city centre area carrying over 37,000 passengers per week.

TfGM Committee Chair, Councillor Andrew Fender, said: “I’m delighted that Lord Holmes was able to join us to officially launch this initiative, which makes travel easier for people with hearing or visual impairments.Approximately 1.9 million trips were made by Metroshuttle in the city centre in 2015 and I’m really pleased that TfGM have been able to make it more accessible to passengers.”

The Department for Transport’s Green Bus Fund and TfGM funded the 20 Optare low carbon buses that operate on the Manchester Metroshuttle routes. TfGM paid for them to be retrofitted with brand new passenger information screens, making travel easier for passengers with visual or hearing impairments.

The 19-inch high-resolution screens provide automatic audio and visual announcements for passengers on aspects of the journey such as the route plan and the next stop, as well as places of interest and nearby businesses.The technology was fitted by contractors McKenna Brothers working with the charity Guide Dogs UK.

Lord Holmes, who has recently returned from the Paralympic games in Rio de Janeiro, was welcomed to Manchester by Councillor Andrew Fender, Chair of TfGM Committee. He was given a guided trip on one of the Metroshuttle buses to experience the new technology for himself.

He said: “The improvements made to Manchester’s Metroshuttle service is a fantastic way of ensuring the city’s transport network is more accessible. People living with visual or hearing impairments can feel more confident in travelling independently due to initiatives like this.”

“Thank you to TfGM for inviting me to celebrate the formal launch of this vital equipment. Everyone involved should be very proud.”

James White from Guide Dogs UK, added: “Our research shows that 70% of people with sight loss have missed their bus stop completely at some point on their travels. Imagine how anxious that would make you feel every time you boarded a bus that didn’t have audio announcements.”

“People with sight loss shouldn’t have to miss out on hopping on the bus to go and see family and friends or go to work, just like everyone else. We’re delighted that TfGM has embraced technology that helps people with sight and hearing loss, making their bus journey that bit more straightforward. It would be great if bus operators across Greater Manchester follow suit.”

Adrian Worsfold, Director of Operations for First Manchester, said: “We appreciate the importance of delivering better information for customers and I’m sure the addition of audio and visual announcements will help increase accessibility for all customers, and add to the high quality of service delivered by our driving team.”