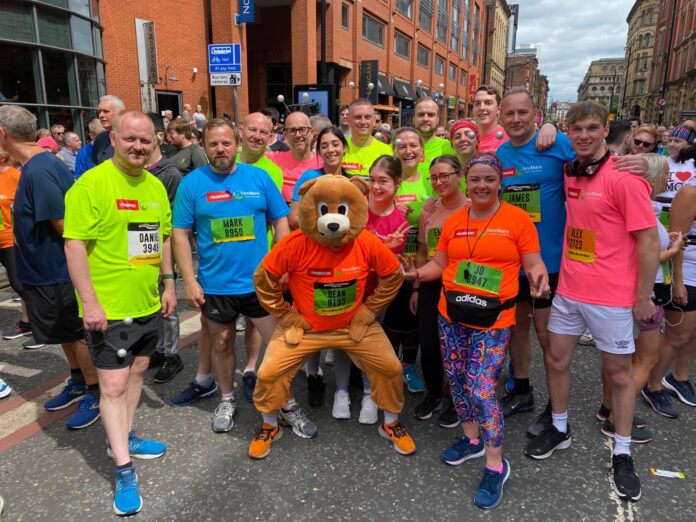 Local Howdens depots from the North West region, have raised over £2,500 for FareShare Greater Manchester, after a team of employees completed the Great Manchester Run this weekend.

A team of 11 employees from various North West depots of Howdens, UK’s number one trade kitchen supplier, took part in the 10k part of the annual event, which is the largest of its type in Europe, with the team raising money for FareShare Greater Manchester.

FareShare Greater Manchester, which is operated by EMERGE 3Rs, was launched in 2008 to support communities in the fight against food poverty and to reduce food waste in and around Manchester. The organisation redistributes food to over 230 charities and community groups to help provide meals, food parcels and snacks to those who need it the most.

Jo Cribbin, Howdens Cheadle Depot Manager, said, “We have supported FareShare Greater Manchester for a while now, and we are always looking for more ways to help them. What they do for the local community is incredible, and I am so proud to be part of a team that is eager to support their invaluable work.

The atmosphere on the day was electric, and the crowd couldn’t have been more supportive. It has never been more important to show support to organisations like FareShare that are making a real difference in the communities that we live in. I’m sure that the team will be putting on their running shoes again for some more fundraising activity, watch this space!”

The team of runners from Howdens were also supported by Howdens’ very own ‘Disco Truck’. The truck was operated by Howdens employees, who were on-hand to provide motivational music and much-needed refreshments to the team and other race participants.

Howdens has local depots across Greater Manchester and the North West. If you are a tradesperson and would like to enquire about opening a trade account, please visit your local depot.

If you’re a homeowner looking for kitchen and home inspiration you can find out more about Howdens by clicking here.

Manchester shows solidarity with the people of Nice

Number of times people were hospitalised due to heart failure rose significantly during the...

So where is the best place to live in Manchester