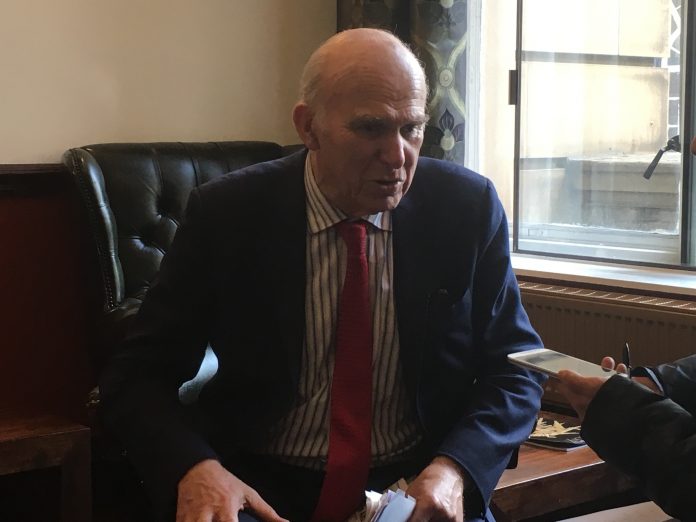 Liberal Democrat Leader Vince Cable was in Manchester earlier today and About Manchester took the opportunity to talk with him.

Against the backdrop of the Row over City Centre affordable housing, which has seen various articles, opinions and a massive falling out between Manchester’s Labour council and the Guardian newspaper, the Lib Dem leader was here to support Manchester Council’s sole opposition representative John Leech and was hoping that the party could build up a presence on the council.

“It is not good for Manchester not even for the Labour Party to have a one party state” said Sir Vince and hoped that his party could at least start to build up a viable opposition in May’s local elections.

So was this a national issue or is it peculiar to Manchester?

There is a massive housing problem in the UK over supply and just about everywhere in the country it is alsmost impossible for young people especially to get onto the housing ladder.

However he added there are also specific local problems as well.The council using its land and its compulsory purchase powers can ensure that housing is built which can accommodate mixed communities and there is a component of affordable and social housing.

To be fair to Manchester council though he adds that the coalition government of which he was part, released some of the rules around the so called Section 106 rules which allowed for a proportion of affordable housing across new developments but, he adds they are now taking advantage if it in a way that is damaging.

He cites the one bedroom flats going for astronomical figures, “there is nothing wrong with luxury developments but they must stand alongside affordable properties.” adding that these properties are being advertised overseas, are aimed at people making speculative investments, instead of local people.

What then are the solutions to this we asked?

Step up the amount of house building firstly and allow councils the ability to borrow to build, which accepts was partly the fault of legislation passed by the coalition government of which he was a member and thirdly that they should work more closely with developers to ensure that 5ey maximize the benefits of Section 106 requirements.

The cost of housing is not all about supply, it is also based on demand, and therefore is there something that can be done on that side.

Cable reminds us that again the coalition government was partly to blame for this when under George Osborne, they introduced the help to buy scheme which has pushed up prices. “I was strongly against it” says Cable, “ it has caused a lot of harm, given enormous profits to some house builders”

What about penalising house builders who sit on land without developing it.

Cabke agrees with it but says a lot of the problem lies in the public sector with organisations such as the NHS sitting on a lot of land as well as councils. “If they hoard it, it makes their balance sheets look a lot better,”

We couldn’t let the opportunity go without discussing the current stand off with Russia.

Cable said that the Labour leader Jeremy Corbyn had totally misjudged the political wind yesterday in the Commons when he appeared to be casting count on the honesty of security forces and “buying in to completely bogus stories.”

The government he feels should be tougher in its stance with President Putin, “the only way to really hurt the Russian regime is to seize the property….if they stick with purely symbolic things that is not going to hurt the Russians”

An epic of four seasons at Old Granada Studios.