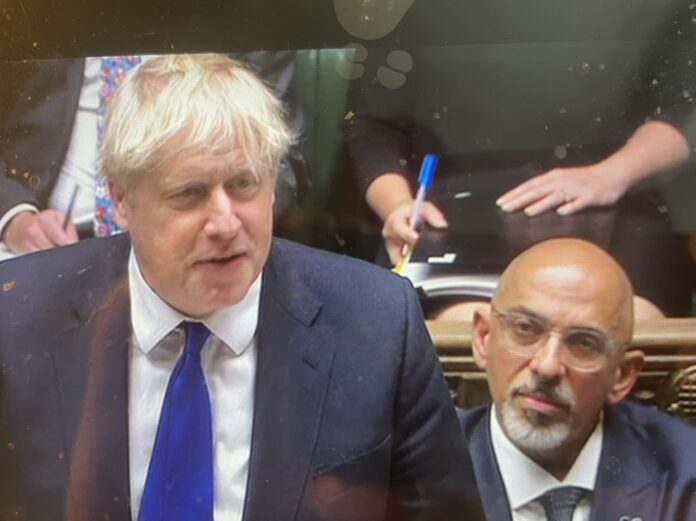 Five of them, Kemi Badenoch, Neil O’Brien, Alex Burghart, Lee Rowley and Julia Lopez co-wrote a letter calling on him to step aside.

“It has been increasingly clear that the Government cannot function given the issues that have come to light and the way in which they have been handled.” they said

Mims Davies has also quit as the employment minister this afternoon.

The 1922 Committee is expected to meet at 5 p.m. to discuss allowing another vote of no confidence in Johnson.

The former Health Secretary Sajid Javid has said in his resignation speech that there are only so many times that the reset button can be pressed.The problem starts at the top and that is not going to change.

He said that he gave the PM one last chance, but now he has had enough

He told the House of Commons that he wanted to talk about the importance of integrity. Institutions and integrity underpin our democracy.

Kier Starmer has told Boris Johnson that the  Tories who are resigning now, after everything else, have no integrity. This is the first instance of sinking ships fleeing the rat adding that the Tories resigning as “the charge of the lightweight brigade”.

Attacking the Prime Minister why he promoted Chris Pincher knowing he had been guilty of predatory behaviour, he said that it was reported to have called the MP “Pincher by name, pincher by nature”. Has he ever said that?

Boris Johnson replied that a complaint about Pincher was raised with him. “I greatly regret that he continued in office.” He then told the House that people want to hear about other jobs, like the 500,000 new ones created.

Starmer added that when he was a prosecutor he heard evidence like that given by the victim of Pincher frequently added that what is needed is for the whole of the government to go.

He said that “anyone with anything about them would be long gone from his frontbench” adding  “In the middle of a crisis, doesn’t the country deserve better than a Z-list cast of nodding dogs?”

Tory back bencher Tim Loughton asked if there are any circumstances in which he would resign while Scottish Nationalist leader said that he recently compared Johnson to Monty Python’s Black Knight. “In fact, he is more like the dead parrot.”

Conservative MP Garry Sambrook said that  says when Johnson toured the tearoom yesterday Johnson said there were seven Tory MPs at the Carlton Club last week. Johnson said they should have intervened to stop Chris Pincher drinking so much. Not only was that offensive to those who did intervene, it should an abdication of responsibility

The Labour benches applauded and were reprimanded by the speaker.

Former cabinet minister David Davis said that theongoing leadership crisis is paralysing government decision making and called on Johnson to put the interests of the country above that of his own.