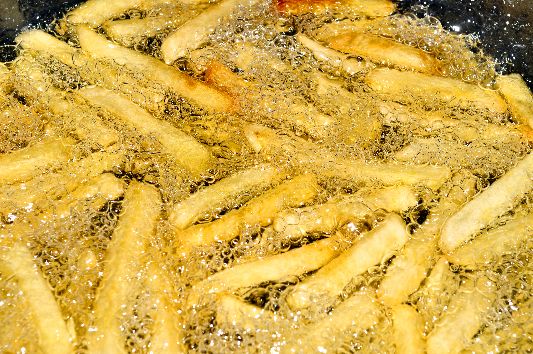 Fats being released into the atmosphere from cookers such as deep fat fryers may be enhancing the formation of clouds, which have a major cooling effect on the planet according to researchers.

Scientists demonstrated for the first time that fatty acid molecules emitted during cooking can spontaneously form complex 3D structures in atmospheric aerosol droplets. The team believes that the formation of these highly ordered structures is likely to extend the atmospheric lifetimes of these molecules and affects how clouds form.

The work is a collaboration between the atmospheric scientist Dr Christian Pfrang and the biophysical chemist Dr Adam Squires.  Dr Pfrang, Associate Professor of Physical & Atmospheric Chemistry at the University of Reading, said:

It is known that fatty acid molecules coating the surface of aerosol particles in the atmosphere may affect the aerosol’s ability to seed cloud formation. However, this is the first time scientists have considered what these molecules do inside of the aerosol droplet, and we have shown that they may be assembling into a range of complex, ordered patterns and structures. This means they may last longer in the atmosphere.”

“The full impact of the surprisingly complex molecular arrangements of these fatty acid molecules in the environment is hard to quantify at this stage since these structures have not previously been considered by the atmospheric science community: there is no reliable estimate available yet how much organic material shows such complex self-assembly in the atmosphere and further research is urgently needed.”

“However, it is likely that these structures have a significant effect on water uptake of droplets in the atmosphere, increase lifetimes of reactive molecules and generally slow down transport inside these droplets with yet unexplored consequences.”

The international team also included researchers from Universities of Bristol and Lund, Diamond Light Source and MAX-lab; they studied a model system to represent atmospheric aerosol consisting of individually levitated droplets of mixtures of brine and oleic acid, a fatty acid associated with cooking emissions which contributes approximately 10% to the urban load of fine particulate matter in London.

They observed that the fat molecules assembled into highly ordered “lyotropic” phases – crystal-like lattices of spheres or cylinders which are known to strongly affect water uptake from the surrounding environment, a key process in cloud nucleation, and viscosity, which affects chemical reaction rates.  Further experiments showed that the fatty acids were more resistant to chemical attack by ozone, and therefore can survive longer and travel further in the atmosphere, if they adopt these complex structures.  The extended lifetimes of these molecules may facilitate droplet growth and thus cloud formation.

How to Create a CV for a Job in Manchester

Flying Scotsman to make a return to Rawtenstall