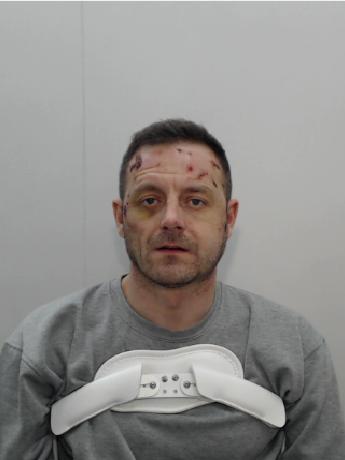 A boyfriend who manically stabbed his partner to death before jumping out of a second storey window and terrorising commuters has been jailed.

37 year old Michael Marler of Brideoak Street, Oldham was sentenced to life in prison and will serve a minimum of 21 years, at Manchester Crown Square today, Friday 3 August 2018, after he was found guilty of the murder of Danielle Richardson.

The court heard how on Monday 12 February 2018, Marler had driven to the flat on Swan Street with the 24-year-old where they had a reservation for two evenings.

The following day, Marler began arguing with Danielle before beating her and fatally stabbing her 15 times.

He subsequently dialled ‘999’ but disconnected the call before it was answered.

Marler then leapt from the second storey flat window where he landed on the roof of a black Hyundai parked on the street below.

He jumped in to the passenger’s seat and assaulted the 59-year-old woman sat in the driver’s seat of the car.

Marler then went on a rampage and assaulted a 24-year-old man as well as damaging a number of cars in Ancoats.

Meanwhile, emergency calls were being made to GMP and officers were sent to the area where they managed to detain him on Oldham Road.

Once detained, officers went into the flat on Swan Street and sadly found the body of Danielle Richardson.

An Independent Office for Police Conduct investigation is ongoing into previous police contact with Danielle Richardson.

Senior Investigating Officer Bob Tonge, of GMP’s Major Incident Support Unit, said: “The traumatic chain of events that stemmed from Marler’s despicable actions brutally took away an innocent life and injured and traumatised many members of the public who had been going about their usual day in the city centre.

“The incidents unfolded in rapid succession as Marler went on a violent rampage but thankfully officers were on the scene in a matter of minutes and while he resisted arrest, police were able to detain him and prevent him from harming anyone else.

“Danielle was subjected to the most brutal attack at the hands of Marler. He showed nothing but rage as he relentlessly stabbed her body multiple times, leaving her with no chance of survival.

“Despite this terrifying and vicious attack, we know Danielle bravely tried to defend herself and fight for her life.

“The pain her family have had to endure since this day is truly heart-breaking and no family should ever be put through agony like this.

“I hope today’s result goes some way to helping them move forwards from this horrendous ordeal and heal as a family.”

—
Paying tribute to Danielle, her family said: “Dannii was much loved by all her family and friends and had much life ahead of her.

“Dannii was taken from us in February in completely unnecessary circumstances. We cannot express how devastated we are that her life has been stolen from her.

“Dannii is missed every minute of every day.

“We can try to repair our heartache although no matter how long the sentence is, it will not bring Dannii back or make our loss any easier.

“We need to attempt to move on and hopefully today will now provide closure for our pain over the last few months, however, we will never forget Dannii or the many memories she has given us.

“We would like to thank everyone who has supported us over the past few months.”

Jailed for manslaughter after covering up death