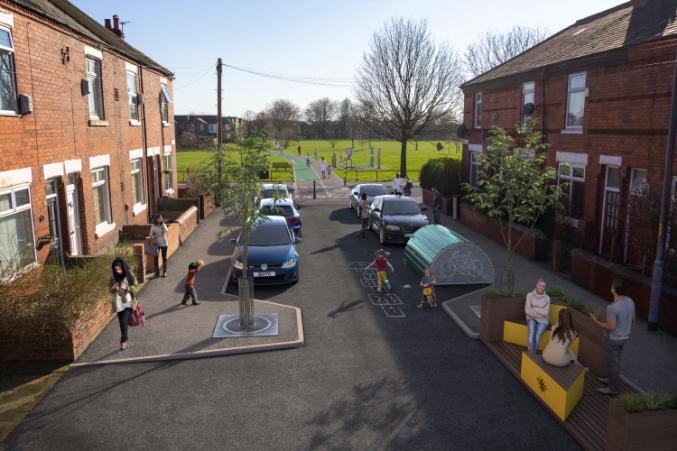 The Levenshulme Bee Network project, supported by Manchester City Council, scooped the ‘Community Project of the Year’ award at the 2019 Healthy Streets Summit, held in Glasgow.

The award win, which recognises plans to encourage more residents and visitors to walk and cycle in an ‘active neighbourhood’, comes as a report to be heard by Manchester City Council’s Executive this week (Weds 16 October) details proposals to fund development costs for the scheme.

An initial capital budget commitment has been put forward for approval to fund the engagement, design and trials process for the scheme, using money allocated from the Greater Manchester Mayor’s Challenge Fund.

The Healthy Streets award was collected on behalf of Levenshulme Bee Network by Peter O’Hare and Pauline Johnston, who said: “We’re delighted the community has been acknowledged for pioneering the approach to developing people-friendly streets working together with Manchester City Council.

“We’re looking forward to getting even more people involved in the design and delivery of our active neighbourhood projects over the next year and building on local people’s enthusiasm.”

Residents from the Levenshulme Bee Network group have led the proposals for this scheme, with the support of the council and Sustrans.  They intend to create an active ‘filtered’ neighbourhood in Levenshulme, reducing traffic in the area through changes such as modal filters, “school streets” that are closed to traffic when children are arriving at and leaving school, improving crossings and adding green spaces. This approach helps to reduce the amount of through-traffic experienced and encourages residents to use other forms of sustainable transport – particularly walking and cycling.

The project is expected to include a series of junction upgrades, parallel crossings, traffic filters and improvements to the look and feel of local streets – connecting community centres, GP surgeries and schools to create a better, safer environment for trips on foot or by bike.

Greater Manchester Commissioner for Cycling and Walking, Chris Boardman said: “This project is an excellent example of what happens when residents lead the way and are given the opportunity to design their neighbourhood in a way that best serves their needs. With the support of the council, this project will enable local people to move around more easily and safely without cars, and that benefits everybody.”

Oldham’s community response has ­supported more than 4,100 people in emergency need during Covid...