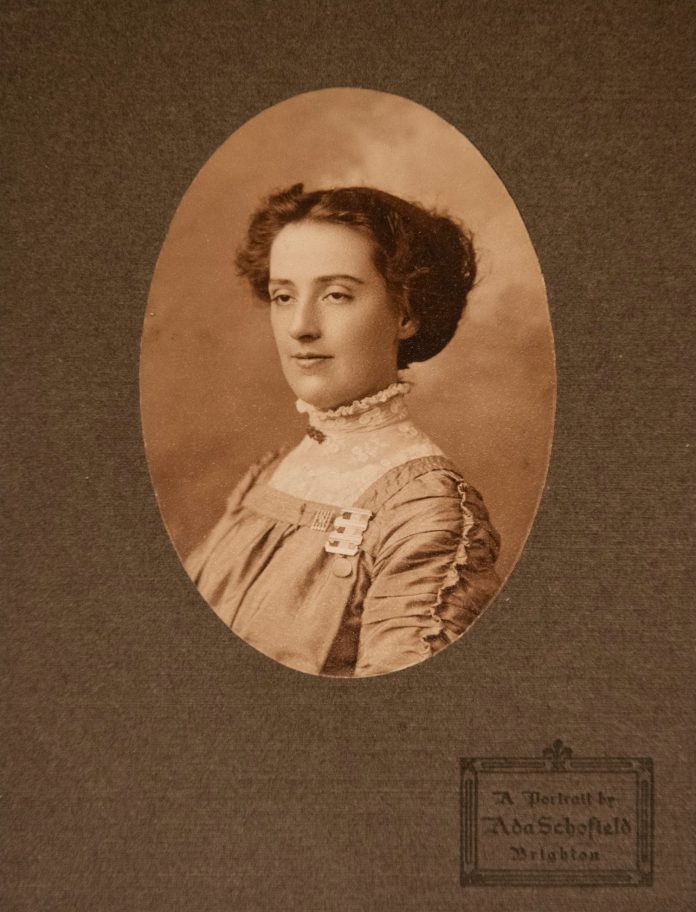 People’s History Museum has discovered a letter written in prison by one suffragette to another detailing the first known written account of force-feeding.

The handwritten letter written by suffragette Charlotte Marsh will now go on display at the museum from today as part of its Heritage Lottery Fund supported exhibition, Represent! Voices 100 Years On (until 3 February 2019).

The discovery came about when Phillip Sycamore, the grandson of suffragette Selina Martin, loaned some of his grandmother’s personal papers and memorabilia to People’s History Museum.

These pieces include letters, her Women’s Social and Political Union (WSPU) hunger strike medal, and a photograph of Selina wearing her Holloway Prison brooch; both the medal and the brooch were presented to Selina by the WSPU to honour the sacrifices that she made for the suffragette movement, including imprisonment.

As part of her research into Selina’s story, People’s History Museum’s Programme Officer Helen Antrobus spent time researching and examining the objects, which is when the discovery of the letter, written on a title page torn from a book, was made.

The letter was written to Selina in November 1909 by Charlotte Marsh, one of the first women to be force-fed in prison, and is in pencil, barely decipherable. The women were being held in Winson Green prison, Birmingham. Charlotte and Selina were arrested alongside six other women for protesting about the visit of Prime Minister Herbert Asquith to Bingley Hall in Birmingham.

Helen Antrobus, Programme Office for People’s History Museum, says, “The letter reveals the strain, both emotional and physical, that these women were enduring and how they looked to each other for the support and strength they needed. Their aim was to be treated as political offenders, and at this time they wouldn’t have known how historically notorious force-feeding was to become. Their sacrifice, determination and united spirit is clear within the letter, which is extremely moving to read.”

Charlotte Marsh writes, “Matron comes everyday to try and get me to eat but no – she can chase me around my cell! Won’t it seem funny to eat again. Sometimes I am ravenous, aren’t you? Write to me when I come out. No surrender!”

Charlotte asks Selina to send her mother, Mrs Marsh, a picture and to let her know that she is well and happy and hopes to write in the next month. The letter also alludes to the fact that the women campaigners in prison were regularly smuggling letters between themselves, even using sanitary towels to hide their notes in.

Selina Martin’s collection is now on display as part of the exhibition Represent! Voice 100 Years On, which tells the stories of those who have fought for representation a century on from when the Representation of the People Act of 1918 gave all men and some women the right to vote in Britain. These pieces have now been joined by the letter written by Charlotte Marsh, which will all be on display until 3 February 2019.

Jenny Mabbott, Head of Collections at People’s History Museum, says, “It is wonderful that in creating an exhibition that tells the stories of those seeking representation we have been able to reveal previously unheard voices of those from the past who fought for equality. Hearing Charlotte’s story in her words brings alive the incredible spirit of those campaigning for women’s suffrage.”

Selina Martin’s own story is that of a working class suffragette from Ulverston who found herself in prison three times, on each occasion refusing to eat to make her protest. Whilst her family were told she was in good health and being treated well, her letters and diaries tell a very different story. During her imprisonment in Liverpool in the winter of 1909, Selina was beaten, force-fed, and left to freeze in her cell. The Governor of the gaol claimed she was being treated “as humanely and kindly as possible”.

Selina Martin and Charlotte Marsh have both been named Radical Heroes by People’s History Museum. This membership scheme celebrates the people whose ideas have shaped our society, with the opportunity for individuals or organisations to sponsor the Radical Hero of their choice to raise funds to support the national museum of democracy’s historical collections, exhibitions and Learning Programme.

People’s History Museum is open seven days a week from 10.00am to 5.00pm, Radical Lates are on the second Thursday each month, open until 8.00pm.  The museum is free to enter with a suggested donation of £5.  Represent! Voices 100 Years On is a Family Friendly exhibition that runs until 3 February 2019.  To find out about visiting the museum, its full events programme and for more information on Radical Heroes, visit www.phm.org.uk.

Preparing for the busiest night of the year