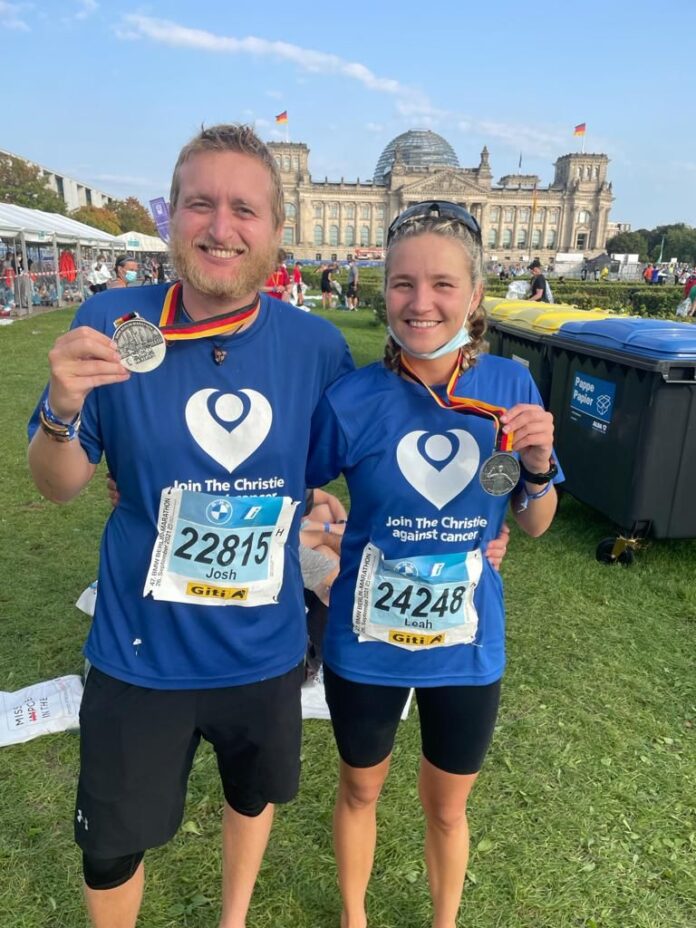 The daughter of a much loved social worker and yoga instructor who died from cancer has completed the world famous Berlin marathon in memory of her mum, Josephine Smith, who was a patient at The Christie.

Leah Strutt-Smith (26) who recently graduated with a Masters degree, and her partner, business development manager Josh Alton (29) from Helmshore in Lancashire, raised £3,696 for The Christie charity, by running the Berlin Marathon on 26 September.

Josh completed the run in 4h 56m, with Leah seven minutes faster, covering the distance in 4h 49m. “Mum would have loved the fact that we ran the marathon in her honour,” said Leah. “She loved running and was always up for a challenge.

“My mum was born in Bury. She was very spiritual and loved Buddhism. In 2010, she was diagnosed with non-Hodgkin’s Lymphoma, when I was 15. She had an operation and chemotherapy, and after a huge effort went into remission. During this time, she worked, taught yoga, travelled and lived her life to the fullest.

“In 2018 the cancer came back. She began chemotherapy again before having a stem cell transplant in January 2019. She was given a 33% chance of the transplant succeeding and we were told it would take 12 months to know if the treatment had worked. One month short of that, in December 2019, we found out that the cancer had spread, and mum had a mass of cancer cells in her brain, causing cognitive difficulties.

“I vividly remember a call from mum on Friday 13 December 2019 when I was at work in London. She sounded so unwell. I asked my stepdad, Pete, to take her to The Christie and I rushed to Euston station and got on a train to Manchester.

“Mum was in intensive care and slept for three days without waking. The doctors told us she wouldn’t wake up but then one morning I was surprised to see three nurses around her bed. She called me over and gave me a big hug. Miraculously she had woken up and was in a very good mood.

“We were in The Christie over Christmas and for nearly a month I spent most nights in the hospital, sleeping in the relative’s room. The staff were unbelievably compassionate, feeding me, supporting me and sometimes even entertaining me as mum slept.

“I spent a very memorable Christmas Day on the Palatine ward with mum where Father Christmas visited with presents and we were both fed a delicious Christmas dinner and sang together. It was very special, and the staff were full of cheer despite being at work rather than with their own families on the day.

“In January we were able to take mum home where she received palliative care from district nurses. I slept on a mattress at the foot of her bed, and we had a lovely time together. On 26 January we threw a small party for her birthday where she could see her closest friends and be the life of the party. Just six days later she passed away peacefully at home, surrounded by me, Josh, Pete and her closest friends.

“Mum was very popular, and her loss is felt very greatly by all those who knew her. Unsurprisingly, over 200 people attended her funeral. Mum’s choir, Manchester Halle Ancoats Community Choir, sang at the service, and her stepson Doug and his partner Angie sang Neil Young’s Harvest Moon. I’m grateful that as an immuno-vulnerable person mum didn’t have to live through COVID-19 and that we were able to have a massive celebration of her life before the restrictions came in.

“She was the life and soul of the party. She was the brightest shining sun in any room of people. Her love was unconditional, benevolent, and never ceasing. She was the bravest, strongest woman I ever knew.

“The care both mum and I received at The Christie was outstanding which was why I wanted to do something to give back and support The Christie charity.

“I discovered the fundraising office in the hospital when I was seeing mum and before I knew it had signed up to run a marathon for The Christie charity. They had places in the London and Manchester marathons but when Berlin was mentioned I couldn’t resist the excuse to have a city break as well as run a marathon. The charity has been amazing throughout, checking in with our training, sending us encouragement and giving us fundraising tips.

Leah was 15 when she first took up running, joining her mum Jo at a local running club. “Running was something me and mum did together,” says Leah. “Mum ran the Blackpool 10k every year and that was my first ever race. I love the headspace I get when running. I listen to music and audiobooks and enjoy not thinking about anything.

“After years of resisting, I finally convinced Josh to do the couch to 5k in 2019, and he quickly caught me up and we have since done run many runs together. He outwardly hates running but manages to drag himself out most days. He likes beating old PBs and I think secretly he actually enjoys running.”

Both Josh and Leah overcame challenges this year that disrupted their marathon training.

During Jo’s treatment, Leah and Josh learned how difficult it could be to find stem cell donors, so they signed up to be donors. In January 2021, Josh was found to be a match for a potential beneficiary so put his training on hold to donate stem cells. Leah spent four days injecting him with a stem cell stimulant twice daily which was painful and made him ill, followed by several days in Sheffield whilst his stem cells were collected. It took Josh a while to recover from the procedure and get back to marathon training.

Then in June, both Leah and Josh caught COVID-19 and it stopped them from being able to run for four weeks.

Aside from running, Leah and Josh compete as a mixed team in flip cup tournaments. Josh’s daughter, and Leah’s stepdaughter, eight-year-old Elizabeth, encouraged them in their training, joining them for local park runs and even produced some special handmade medals for Josh and Leah.