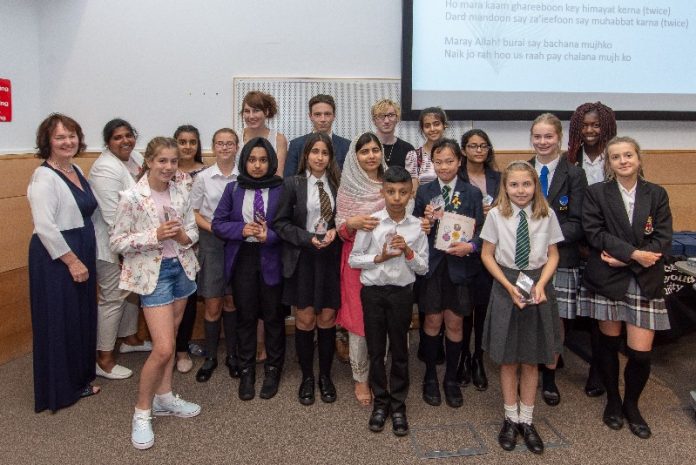 Nobel Peace Prize winner Malala was the special guest at the regional prizegiving ceremony of the Mother Tongue Other Tongue competition – a national contest organised by languages consortium Routes Into Languages and Manchester Metropolitan University.

Schoolchildren from Lancashire, Cheshire, Greater Manchester, Liverpool and the West Midlands attended the ceremony at Manchester Metropolitan on Monday and took home awards for their creative written entries.

A diverse range of languages were on show including Spanish, French, Italian, Urdu, Chinese, Catalan, Greek and Persian.

Malala told the audience: “I am honoured to be here and I would like to congratulate everyone who participated in this initiative and who wrote poetry in their mother tongue and also in other languages they are learning.

“Well done to all those getting prizes today for their achievements.”

Malala explained how being born in Pakistan, she grew up typically trilingual, speaking the Pashto of her native Swat Valley as well as Pakistan’s national language Urdu and the English of official Government business.

Malala said: “When I came to the UK I realised how they are trying to create this multicultural environment and how learning a new language allows students and people to appreciate and celebrate diversity.

“It’s a skill – a talent – and I hope those of you learning a new language continue to do so because the more you learn, the broader your mind becomes and allows you to think big.”

Mother Tongue Other Tongue is divided into two sections. The Mother Tongue half sees children who do not have English as a first language write about what a lullaby, poem or song in their native language means to them, while as part of Other Tongue pupils create an original poem in a second language that they are learning at school.

More than 30,000 pupils have taken part since the innovative challenge was launched in 2012. The contest is endorsed by the poet laureate, Dame Carol Ann Duffy, who is a Professor of Contemporary Poetry and Creative Director of the University’s Manchester Writing School and developed Mother Tongue Other Tongue as a Laureate Education project.

Yasmin Hussain, Routes into Languages NW Co-Director and Faculty Outreach Manager at the University, said: “We were delighted to have Malala as our guest of honour at the national celebration of the Mother Tongue Other Tongue Competition. It is a great opportunity for young people to be inspired by such an amazing young role model and educational activist, with Malala sharing her own experiences of the importance of poetry, cultural heritage and creative writing.

“The Mother Tongue Other Tongue competition is unique as it allows pupils to use their bilingualism creatively. The project has allowed pupils to explore their multiple identities through culture, poetry and language.

“Being multilingual has many advantages and it’s great that pupils learn to value this early on in their lives. Each year the project has gone from strength to strength, nationally 30,000 pupils have taken part in the competition.”

Professor Sharon Handley, Pro-Vice-Chancellor for the Faculty of Arts and Humanities at Manchester Metropolitan University, said: “I was delighted to welcome Malala Yousafzai to Manchester Metropolitan for this year’s national Mother Tongue Other Tongue competition. She is an inspirational role model to young people across the world and a powerful advocate of the value of education.

“As the Director of Routes into Languages North West, I have always been passionate about encouraging young people to learn new languages, and proud that Manchester Metropolitan hosts this yearly celebration of cultural and linguistic diversity. It is especially apt that it began here in Manchester, one of the most multilingual cities in the world, where 40% of children speak more than one language.

“I am always amazed by the quality of entries to the competition and this year was no exception. I want to thank all of the students who have taken part and the ambassadors and teachers for encouraging them to do so.”

Tens of thousands of affordable houses promised for Greater Manchester