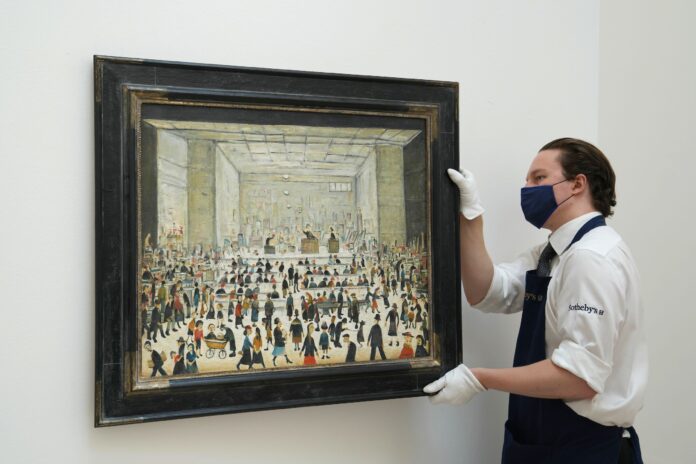 One of Britain’s most beloved artists, L.S. Lowry and his works have been a mainstay at auctions for decades.

What is lesser known is that he once turned his hand to painting an auction taking place, resulting in a bustling scene characteristic of the artist.

Populated by familiar characters, and even a dog on a lead, The Auctiontransports the viewer into the centre of the action, with the auctioneer on the rostrum poised to bring the gavel down.

Executed on a large-scale in 1958, the work has never been offered at auction, and was acquired by the present owners over two decades ago. It was exhibited at Lowry’s landmark retrospective at the Royal Academy in 1976 and was last shown at AMNUA in Nanjing in China in 2014.

Lowry only ever painted a small handful of interior scenes – intimate family groups, a doctor’s surgery, an election rally and an outpatients’ hall – in each instance choosing subjects that resonated with him. As early as the 1920s, Lowry touched on the subject of auctions with a drawing titled Selling Up the Old Antiques Shop. Another painting, Jackson’s Auction and Saleroom from 1952, depicts the exterior of the auction house in Manchester, with furniture amassed outside. In The Auction, this longstanding interest comes to its apex, and the viewer is shown the full glory of a sale in action for the first and only time. Paintings are stacked high and cabinets are busy being viewed, and through the hustle and bustle and rows of attendees, the auctioneer is elevated and about to seal the sale – a moment that would cause emotions from joy to disappointment for the buyer, underbidder or seller. There is a distinct sense of drama unfolding on a stage, which no doubt appealed to Lowry, who enjoyed many visits to the theatre.

Surveying the boisterous scene gives an insight into how auctions have evolved over time. From the mid-20th century onwards, the high-profile sales of prestigious collections became increasingly social events – host to a rich cast of characters that would no doubt have intrigued Lowry as a great British chronicler of contemporary life.

With this work, Lowry joins a select group of artists who have tackled the subject, from the great English satirists such as William Hogarth and Thomas Rowlandson, through to Bansky today. Its date falls in the same year as Sotheby’s landmark auction of the Goldschmidt collection, which saw crowds gather down New Bond Street. Presented as a black-tie gala and heralding the ‘Evening Sale’ format, the Goldschmidt sale was the first auction of its kind and so attracted extensive public interest and newspaper headlines the following day.

The subject of auction also brings to the fore Lowry’s own relationship with the art market.

Lowry was always frank about the financial side of his art, and typical of his character, he likened to his art as a day job on a par with his tax collecting.

Though Lowry did not sell a single work at his first exhibition in Manchester in 1921, he found success in later years, with prices for his works reaching £7,000 at auction during his lifetime. This financial freedom allowed him one indulgence: acquiring artworks. He bought works by young artists, including his protégée Sheila Fell and Lucian Freud, as well as the Pre-Raphaelites.

The artist acquired several masterpieces including a superb version of Rossetti’s Proserpine, which he bought at an auction in 1964 for 5,000 guineas. And so, not only was Lowry an observer of auctions, but he would have been well-aware of the highs and lows of buying and bidding, adding to the personal significance of this exceptional painting. 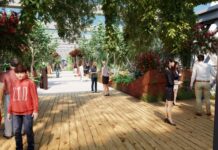 Castlefield viaduct gets approval from council and could open next summer 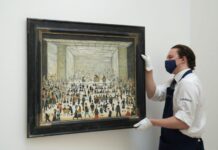 L.S. Lowry’s Only Painting of an Auction Room Sells for £2.6 Million double its estimated price 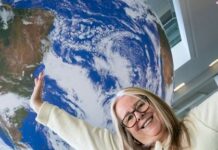 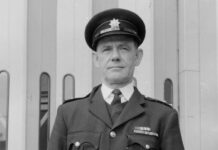