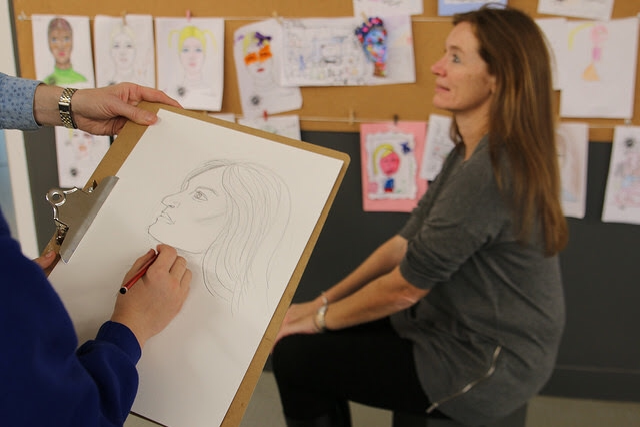 Kids visiting The Lowry this December will have the chance to paint their parent or guardian in the style of a Pre-Raphaelite portrait as part of a new series of free art workshops.

Taking place in The Carole Nash Lookout – The Lowry’s creative space for children and families – the artist-led sessions will teach kids how to draw with maximum realism and use pens and inks just like the famous Pre-Raphaelite artists Dante Gabriel Rossetti and Ford Madox Brown.

The workshops, which are led by artist Paul Pickford, are open to all and will run on Friday 21 and Monday 31 December between 11am and 4pm.

Ahead of the launch, 10-year-olds Tilly and Phoebe from Oldfield Brow Primary School in Altrincham took the opportunity to trial the technique on their teacher, Lynn Thornton, during a school trip to the Salford arts venue.

The Pre-Raphaelite workshops form part of a wider programme of activities that run from Wednesday 19 December to Friday 4 January (2019) that will also teach kids how to paint with watercolours, how to depict stories within artwork as well as exploring the popular Pre-Raphaelite theme of heaven.

The programme of workshops coincides with Lowry & the Pre-Raphaelites, a major new exhibition at The Lowry that celebrates LS Lowry’s love of 19th century artist movement. Sponsored by Sotheby’s, the exhibition runs until Sunday 24 February 2019.

Announcing the final Thunder Girl – Carol Harrison stars as ‘Chrissie’ in The Thunder...