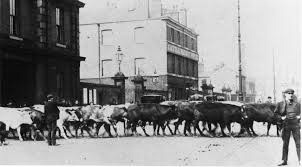 An outbreak of foot and mouth in County Tipperary prevented Salford Cattle market from importing Irish cattle, the effect of the embargo was said to be rather startling with over half the pens empty.

A lorry, meanwhile, containing a large consignment of beef for the Manchester markets collided with a motor engine in Worsley where it proceeded to leak petrol leaving a trail on the highway.

A boy, named Taylor, decided to disguard a match on the trail as it passed through Winton with the obvious circumstances. The beef though was rescued and transferred to another wagon.

An Oldham Athletic player died in hospital two weeks after struck down with sunstroke, Meanwhile it was the hottest day of the year in Manchester with the thermometer hitting 80.4 degrees in the shade

‘Unfortunately the vast bulk of Manchester’s population were unable to follow their natural instincts and make for the seaside -circumstances keeping them grinding at the mill’ said the Evening News.

Manchester was entertaining twenty Chicago citizens who were traveling through Europe to study railway terminals .The guests of the Ship Canal company assembled at the Midland Hotel and following luncheon were taken on a tour of the ship canal docks and a sail on the water.

A sensational innovation in women’s dress for the autumn was announced the most vivid hues will be worn in place of subdued tints which were the norm for the close of the year-pinks sky blues and cherry reds will disperse the gloom of the approaching winter.

Improvement works are well under way at Heaton Park