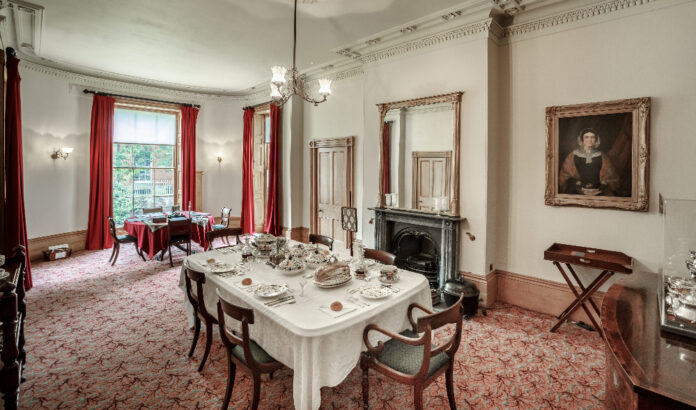 Elizabeth Gaskell’s House is opening 2022 with a North and South season to explore one of Elizabeth Gaskell’s most famous and much loved novels. Bringing the nineteenth century world of North and South from the page into today’s world are a series of online events beginning on Wednesday 26 January 2022 that will appeal to devotees of period dramas, who are both fans of the title and newcomers.

Many of the themes and characters of North and South will chime with readers today, including the evergreen discussions on the North South divide.

Published in 1855, it is set in a fictional industrial ‘grim’ northern town based on Manchester to where its heroine Margaret Hale is forced to move from the ‘so called’ tranquility of the South.

Elizabeth was writing against the norms of the period and her authentic depictions of the northern working classes were radical for the time. Just as some of our social media heroes do today, she used her writing to shine her light on the world as she saw it to expose child poverty, a lack of education and other issues; all of which makes North and South as fascinating and relevant to read now, as ever.

Elizabeth Gaskell’s House online events all contribute to the upkeep of the Grade II listed former home of the Victorian novelist and attract audiences from across the world, a trend the North and South season is expected to continue. The house itself is located just one mile from Manchester city centre and is open to visitors Wednesday, Thursday and Sunday from 11.00am to 4:30pm.

North and South: An Introduction

Tickets are £4 and bookable here

Elizabeth Gaskell House’s North and South season begins with an introduction to the novel and a chance to discover some of the reasons why this was such a ground breaking piece of work. But it’s the conflicted relationship of Margaret Hale and John Thornton and the twists and turns that this takes which really keeps the reader gripped, all of which Gaskell expert Elizabeth Williams will be discussing as part of her talk. Just as intriguing is the context in which this novel was written; Elizabeth herself was a character at the heart of Victorian society and the fact that over this book she had arguments with her editor, Charles Dickens, and that it was published in the year that her dear friend Charlotte Brontë died are all part of an enthralling backdrop.

North and South: A Tale of Two Houses – Lizzy Bennet and Margaret Hale

Tickets are £5 and bookable here

February, the month of romance, will be enlivened with the spotlight shone on two of literature’s best loved heroines Lizzy Bennet from Pride & Prejudice and Margaret Hale from North and South. Bringing together two great literary houses, Jane Austen’s House in Hampshire and Elizabeth Gaskell House in Manchester, this event will be a real treat for lovers of drama. Join Libby Tempest, Chair of the Gaskell Society, and Ellora Sutton, Creative Engagement Officer at Jane Austen’s House, who will be taking a closer look at how Lizzy and Margaret defied the conventions of their times to become heroines for the centuries that have followed.

North and South: A TV Classic

Tickets are £4 and bookable here

Before Bridgerton came North and South; an incredible hit when it was televised as a series by the BBC in 2004. Daniela Denby-Ashe, as heroine Margaret Hale, and Richard Armitage, as mill owner John Thornton, exuded the chemistry penned by Elizabeth Gaskell and won people’s hearts instantly. Chair of the Gaskell Society, Libby Tempest’s talk explores what makes this adaptation so special as a period drama and how it impacted upon Elizabeth Gaskell’s reputation as a writer, with time included for questions.