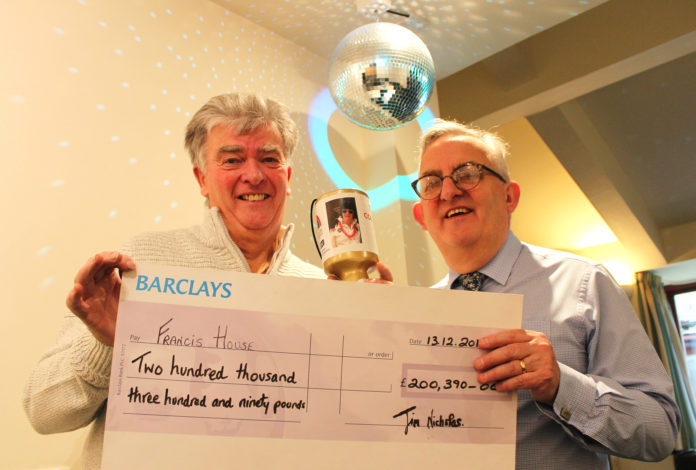 It’s one for the money, two for the show, DJ and Elvis impersonator Jim Nicholas, has rocked up a staggering £200,390 in donations for Manchester children’s hospice Francis House.

During 25 years of fundraising, the retired former head gardener for the Bishop of Salford, has put out a collection box at thousands of venues, delighting audiences from across Greater Manchester.

Jim, 73, from Swinton, has also performed for the Cliff Richard fan club in Birmingham. To his astonishment during his last show, hundreds of teddy bears wrapped with cash donations were thrown on stage by admiring fans.

To thank Jim and his wife Denise, for their long-standing fundraising efforts, Francis House chief executive, David Ireland invited the couple to the hospice in Didsbury where Jim was presented with a special gold collection tin.

David Ireland said: “I was introduced to Jim back in the early 90s. Since that time his fundraising has been prodigious, and he has represented Francis House as an excellent ambassador.Around 2013 Jim reached £100,000 and I told him he had paid for the drains on the new building!We are really thrilled to have gone through the £200,000 barrier and wish Jim well in his continuing fundraising efforts.”

Jim is also the impresario behind the Jimmy Cricket Variety shows organised for Francis House and in 2013, he was awarded a Papal medal, known as the Bene Merenti in recognition of his contribution to the parishes where he’s lived, his work for the Catholic Church and fundraising.

“From day one when I first went to Francis House and saw the families, I felt that I wanted to do everything I could for them. Without Francis House these families would be stuck. If I can entertain people and they enjoy what I’m doing, and if that helps in some small way, I’m happy to do it.

“I’m thrilled to bits to have raised £200,390 thanks to Denise and lots of supporters. With an average of twelve shows a year it takes up a lot of my time, organising ticket sales and promotion to venues, but I really enjoy it.” said Jim.

Denise added: “He’s 73 and he still dresses up as Elvis.”

The hospice supports more than 500 families of children and young people with life-limiting conditions from across the whole of Greater Manchester including, Bolton, Bury, Oldham, Stockport, Trafford, Cheshire and Manchester.  A recent refurbishment programme includes a modern bright family lounge and soft play area.

The charity relies heavily on donations to fund the bulk of its work.

Jim already has plans for 2020 including dates at St John Fisher Catholic church in Kearsley and ‘The Stars Come Out for Francis House’ at the Oldham Coliseum in October.