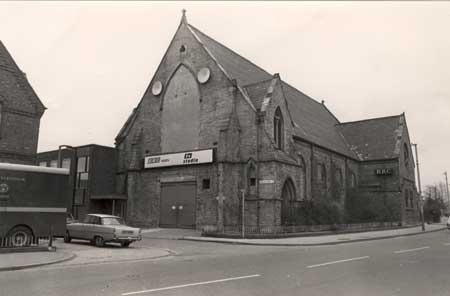 Fifty years ago from a converted church on Dickenson Road, a new music show was aired for the first time from Manchester.

Top of the Pops, direct from Manchester, was based on Radio Luxembourg’s Teen and Twenty Disc Club, commissioned by producer Johnnie Stewart, it would go for forty two years broadcasting over two thousand episodes before being taken off the air after various attempts to revamp it, due to unpopularity.

Dickenson Road would see that January day, The Rolling Stones, playing I Wanna Be Your Man, followed by Dusty Springfield, The Hollies and The Beatles who were number one with I Want to Hold Your Hand.

Its first presenters on that show would include Jimmy Savile who has cast a cloud over celebrations for the show’s fiftieth anniversary along with Samantha Juste, a Mancunian model who would later marry Monkee Micky Dolenz whom she met on the show, Alan “Fluff” Freeman and Pete Murray.

The converted Weslyan church renamed Studio A in Rushlome, was originally booked for only six programmes, but due to its immediate popularity was extended indefinitely after only the second. It was transmitted on Wednesdays, later Thursdays, the entire show had to be put together in about 24 hours as the week’s chart was released at 8:30 a.m. on a Tuesday morning.

The church had been acquired by the BBC and fitted out as a TV studio some years earlier and was selected as other studios were too busy.It had though a long history pre-BBC and was the original home of Mancunian Films.

It was the first permanently equipped studio outside of London, its internal walls were completely rebuilt and its timber floor reinforced.The first television show from the new studio was This Town which saw the towns of Southport and Wolverhampton battle it out wearing many curious costumes with music supplied by the Northern Variety Orchestra

Its first official programme( the one above was a test run ) was watched by the Mayors of numerous Northern Towns and featured a tribute to Gracie Fields along with two new songs ,Lancashire rise and We’ve got cotton in our veins

By mid 1967 the studio had become too small for the increasingly complex production and it was moved to Lime Grove studios in London.The Dickenson Road studios were closed in 1973.Besides Top of the Pops they had hosted amongst others Grandstand, A Question of Sport and It’s a Knockout.and demolished in 1975