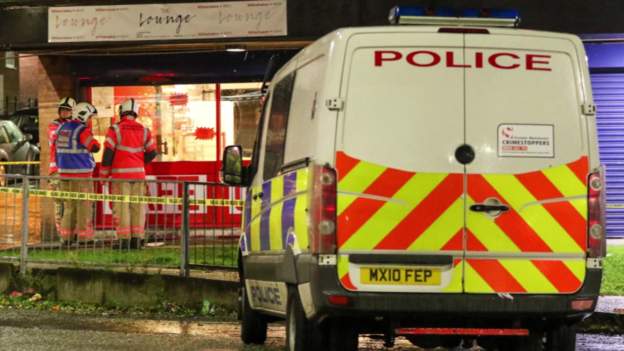 A joint investigation has been launched after an explosion in Salford last night.

When officers arrived, they discovered damage to a shop front and the pavement on Concord Place.

Nearby residents ireported feeling their houses shake after the blast

A cordon remains in place while enquiries are carried out and officers are appealing for anyone with information to come forward.

Superintendent Mark Kenny of GMP’s Salford Borough, said: “This happened in the middle of the night and understandably a number of people will be concerned about what is happened.

“We are working with our colleagues in the fire service to understand the root cause and the circumstances that surround it.

“Fortunately no-one was hurt but this does not dilute the severity of what has happened.

“I want to thank people who have already got in touch with us and I want to urge those who have not yet done so to do the same.

“We are piecing together the information we have received but need you to make that call to gain a fuller picture.”

Anyone with information should contact police on 101 quoting reference number 33 of 12/09/17 or the independent charity Crimestoppers, anonymously, on 0800 555 111.

More than 70 new apprenticeship opportunities have been created across Greater Manchester From funding...