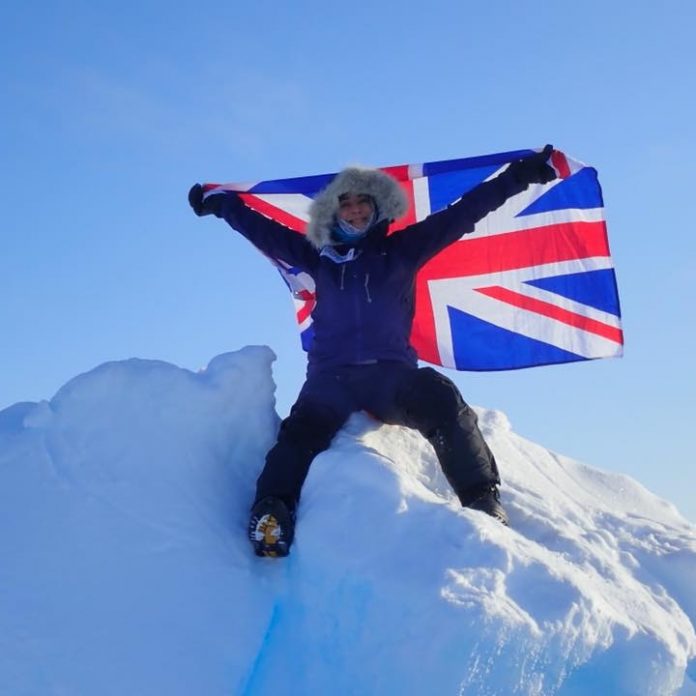 A polar explorer is delighted to see one of the women she led on an all-female expedition to the North Pole win an award for her achievement.

Expeditionist Felicity Aston, MBE, who is the brand ambassador for Preston company Summit To Eat, led Misba Khan on The Women’s Euro-Arabian North Pole Expedition in April. Misba, who is a mum of two from Manchester, is the first British Muslim to do an Arctic expedition and has won a WeAreTheCity Rising Star Award in the Sports category.

The Rising Star Awards recognise the achievements of women below senior management or director level, who represent the female talent pipeline and the next generation of future leaders. The awards were presented to winners this month.

Misba was one of 11 women who Felicity selected to take part in the expedition, which was sponsored by Summit To Eat. The chosen team were whittled down from over 1000 female applicants from around the world.

Felicity said: “It’s always nice to get any kind of recognition for a project, so this is really wonderful. I’m so very pleased for Misba winning. She was such a wonderful character to have on the team. I really thought she was so inspiring – such an inspiration.”

Felicity, who is a world-renowned polar explorer, has completed many expeditions. This includes leading the largest women’s expedition to ski to the South Pole. She is also the first woman to ski solo across the Antarctic. The expeditionist started planning The Women’s Euro-Arabian North Pole Expedition in 2015. She then trained Misba and the all-women team for two years to prepare for it.

“Misba worked so hard and had a lot to overcome, like self-doubt and doubt in her community,” Felicity said. “But even though she had things to prove and challenges to face, she had the capacity to help others on the expedition, and she was always right behind me and the decisions I had to make. I found it astonishing.”

The Arctic expedition brought a unique and diverse group of women together from around the world, who are not elite athletes but ordinary women. This included teachers, scientists, journalists, mothers, business women and entrepreneurs. The aim was to foster greater dialogue and understanding between women of Western and Arabic cultures and to inspire others to reach beyond their own expectations.

Misba, who works in finance for the Salford Royal NHS Foundation Trust, said she was “honoured and surprised” about winning the Rising Star Award.

“It’s hard to believe, coming from the North West and then going to the North Pole,” she said. “The fact that I am the first British Muslim woman to have done so is a privilege.”

Led by Felicity, the expedition took Misba and the team by plane from Svalbard, Norway, to Barneo, a floating ice camp located in the Arctic. The group of women then got a helicopter onto the ice before skiing for seven days to the North Pole. During this time, they navigated dangerous hazards such as moving ice and pressure ridges – high walls of ice stretching for miles – in temperatures as low as -40°C.

Misba said: “The Arctic conditions were extremely tough and difficult to predict, so teamwork was paramount. But the journey was hugely rewarding, and all the more satisfying for its extreme challenges.

“This was a once-in-a-lifetime opportunity, to set feet where so few have been before,” she said. “Credit goes to Felicity for creating the vision, building the team, training, inspiring and guiding, and bringing together a lot of support to make this mission possible.”

When planning the expedition, Felicity said her aim was to help change people’s conceptions of gender, race and culture. She also wanted to encourage people to have the confidence to go and achieve things beyond their own expectations.

“This doesn’t have to be skiing to the North Pole,” she said. “It can be a million different things – starting a course, taking up a new hobby, or going back to university. Hopefully, this will give people an extra push to go and do those things they want to do, which they think they can’t.

“I hope the expedition goes on to show what can be achieved, not just by women but by men, and not just in the UK but internationally,” she said.

How Britain Won the Space Race: The Story of Bernard Lovell and Jodrell Bank