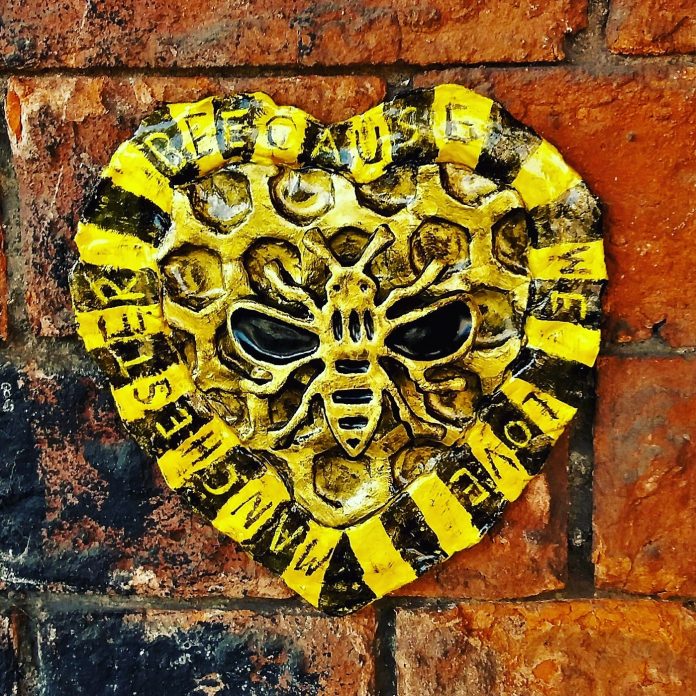 The 4* lifestyle hotel on First Street, operated by Melia Hotels International has teamed up with local artist, Thomas Brown to deliver a stunning new art exhibition available to the general public from 26th April 2018.

Brown started the BeeMancunian project in 2015 in order to reflect the cultural heritage of Manchester through its civic symbol, the worker bee. He works across a variety of mediums and draws inspiration from the culture and environment of his hometown, Manchester.

In 2015 Thomas noticed a Manchester billboard which was missing it’s symbolic bee, naturally assuming the bee had ‘escaped’, he went on to develop the concept by animating it’s assent and take off in four stages, further developing the idea using the Manchester bee as a canvas to tell the story of the city.

Many of his designs have been left in situ around the city centre, for the public to discover and most of his designs can be found on Instagram, @beemancunian

This is the second exhibition the First Street hotel will host, the first being that of Charlotte Wellings, local music photographer. Kris Doyle, Guest Experience Manager at INNSIDE explains;

“Working with local artists, in the same way we do local suppliers is a fundamental pillar in our business. We’re keen to support the local community and showcasing Thomas’s work in the public spaces, which in some hotels can be boring and sterile is a fantastic way to connect with the city.”

“We’re extremely proud to be working with Thomas and envisage the partnership expanding over the next 6 to 8 months with us hosting various activation events, open to the public, to promote the exhibition and the character it gives to our spaces.”

The exhibition officially launches on 26th April 2018 and with the hotel open all day, the work is on display 24 hours. They are driving promotion through their own social media channels and are keen to receive feedback from locals and national and international visitors to the hotel and the city alike.

The exhibition will be complemented in early July by a ‘Manchester Bee Model’ as part of the Wild in Art, Bee in the City Campaign. INNSIDE have sponsored a bee in support of the I Love Manchester Fund and are undergoing the selection process with Wild in Art for a model which will be decorated by another local artist and positioned closed to the venue.

In life they walked through some of the most devastating times in history.