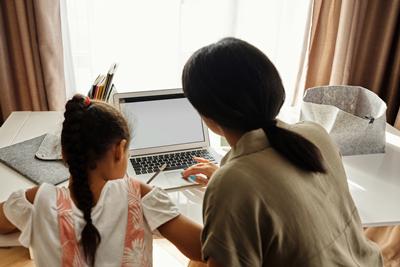 A new study has shown that whilst the amount of home lessons increased during the second period of school closures compared to the first, the inequalities of access between advantaged and disadvantaged families remained.

Researchers at the University of Southampton, used the national Understanding Society study to analyse data collected on home-learning from the families of 2300 primary and 3000 secondary school children in the months of April 2020 and February 2021.

“The transition to distance schooling has affected student learning and transferred a great deal of responsibility for educational activities to families, some of whom struggled with the challenge, therefore exacerbating inequalities in learning opportunities by socio-economic status,” explained Dr Nic Pensiero who led the study.

“The debate on the impact of the learning loss resulting from two periods of school closures, and the measures necessary to remediate that loss, needs a thorough analysis of the learning experiences of children and the extent to which schools improved their remote delivery between the two closure periods.” He continued.

“The increase in time spent on home learning can be explained by the improved provision of lessons, greater availability of computers and the fact that families were better prepared for the second school closure and could engage more with the schoolwork provided,” said Dr Pensiero.

One group that did show an improvement were primary school children in single parent families where the gap in learning between advantaged and disadvantaged families narrowed.

The research team conclude that schools should remain open if feasible during further periods of high infection but should they be forced to close again, better access to IT and academic tutors to compensate for the absence of parents who cannot work from home will help. However, they warn that this will still not go far enough.

“Provision targeted at the most disadvantaged should include more and better guidance for parents on using the IT resources provided. It is in the nature of socio-economic disadvantage that parents in such circumstances are less familiar with and less adept at navigating the wide array of resources that the government has properly provided during the pandemic,” said Dr Pensiero.

The study notes that whilst Government catch-up schemes like the National Tutoring Programme are a timely response and a laudable effort at closing the attainment gap, the total allocation per pupil of £80, which amounts to 6 additional days of schooling, is unlikely to have a significant impact. “Catch-up tutoring should be of the order of several weeks of schooling, but qualitatively it is important to target online and offline resources, online and face to face tutoring, IT hardware and guidance for parents on using it to those students which our research has identified as being in greatest need.” Dr Pensiero added.

Finally, the team recommend that Schools and not central government are in the best position to identify those students and families most in need and should be provided with the necessary funding and flexibility to target provision and support immediately to the most disadvantaged students.

School term to be delayed by a week after Xmas for mass testing of...