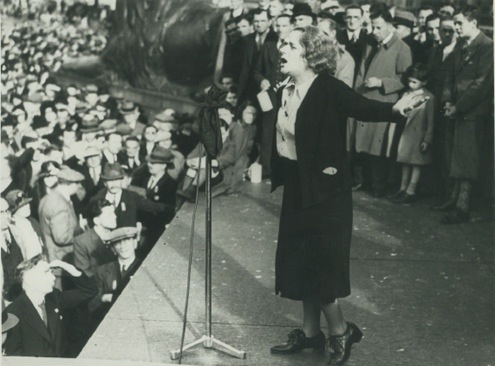 A new historical discussion group, the Mary Quaile Club, will be holding its first meeting this Saturday 15th February at the Cornerstones Community Centre in Langworthy, Salford.

The theme of the meeting will be “What Ever Happened to the Welfare State?

The speakers will be Paula Bartley and Hugh Caffrey who is Secretary of Greater Manchester Keep our NHS Public.

Paula will discuss the life and politics of Ellen Wilkinson. Paula is the author of Ellen Wilkinson, from Red Suffragist to Government Minister, to be published by Pluto Press in February 2014.Ellen grew up in Manchester and was an active socialist and suffragist. She was a Manchester City councillor for a short time before becoming a Labour MP for Middlesbrough and later Jarrow. . In 1936 she took part in the Jarrow Crusade, a march of the unemployed to London. In 1945 the Labour party won a landslide victory and set up the NHS and Welfare State. Ellen became Minister of Education. She died suddenly in 1947.

The meeting is free to all and will start at 2.00pm