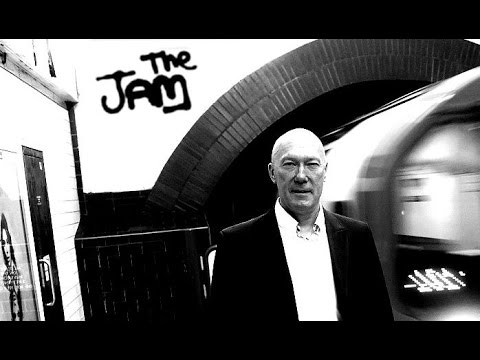 What do you do when the band you formed and whose lead singer and bassist decides to disband it and leave you up the creek without the proverbial paddle?

Ask Rick Buckler, one time drummer with the band the Jam that came out of the 1970’s New Wave movement and lead the Mod revival that would spawn all the clothes, the fashion and even the fighting on the beaches of the mid 1960’s

Their singer and writer, Paul Weller, the mod father, as he is known in many circles, went onto form a successful solo career, revered by the stars of the next and succeeding generations of musicians.

Rich meanwhile, with Jam fans Russell Hastings and David Moore  formed a band known as The Gift to celebrate the continued appeal of one of popular music’s most successful bands  quit the business altogether, came back, formed a tribute band with ex bass player Bruce Foxton, walked away and then wrote his autobiography,That’s Entertainment – My Life in The Jam.

It began at Sheerwater School, the three members of what was to become the Jam were in different years, Rick in the middle, Paul, the youngest and Bruce, a year ahead.

Later he would bump into Paul, Weller doing acoustic covers, Weller wanted a band and needed a drummer, gave him a pile of Chuck Berry records, the first gig came in 1973 at the Sheerwater Youth Club, Steve Brookes the third member of the band.

“It was a complete mess” says Rick, “we knew the beginnings of songs but not the ends.”.

After many changes, they would become a three some, Bruce and Paul swapping roles, and failing many times to get a fourth member, a covers band working at the weekend’s borrowing vans, keeping their gear in a garage on pallets to stop it getting wet as the rain flooded in.

It was the 1000 hours of practice in a safe environment, making the sound of a four piece band with three that homed the band into the unit that they were.

Rich was often described as the most grounded of the three, charged with controlling the egos of the other two, but all three had the same goals, to play.

It’s forty years now since their first albums were released, first approached by Polydor for one single and the possibility of an album.

The single, In the City did well,the album of the same name was recorded in 11 days, then came an American tour, sixteen shows in 17 days, only one suit each which by the time they got to New York says Rick, the suits could have checked themselves in at the airport, and then back to record a second album, This is a Modern World.

It was the third album, All Mod Cons, which would break the band worldwide and soon say Rick, the agenda was set, their lives planned out six months ahead.

The pressure was released in the bars in the hotels after the gigs.

This was the pinnacle, the hotels improved, the record label threw more money at them, there were more shows in Europe, they went to Japan, American arena rock tours at the bottom of the bill supporting Blue Oyster Cult and Be Bop Delux.

Rick admits he doesn’t listen to a lot of today’s music, “I’m 61 why should I-my kids bring it home and ask me to listen but often I’ll just fall asleep”

The business has changed, listening to music of whatever era is easy, the focus on the charts has gone as has the tribalism which was prevalent in the area of the Jam.

In the City,Life from a Window,.Going Underground, he lists as some of his favourites,

Some of the stories are great, the money or lack of it, “it all went into a pot” he says-on the road it was all paid for, the hotels, the food.

“It was crazy really, we were playing on Top of the Pops, our single was number one and I turned up at White City in a Volvo 144, that had 200k on the clock.Driving back the engine fell out and the band made a decision to pay themselves each £2K.”

Rick spent his on a six litre Cadillac, while the band would insist on certain riders before their concert performances, two bottles vodka for Paul, Bacardi for Bruce and Bulls Blood red wine for Rick.

“We didn’t like Top of the Pops, plastic cymbals and rubber bits on the pedals, we hated it but you had to do it, it was the only show in the TV.”

And the politics? ” One of the great things he thinks about Paul were that his lyrics were an observation not a comment, he was often accused of sitting on the fence.”

Eton Rifles was said to be David Cameron’s favourite song “Has he ever listened to the lyrics” said Rick.

The Jam’s career was short, just six albums in five years, Paul Weller announced in the summer of 1982 to the other two that he was leaving, as Rick said, “to get off the treadmill.”

It was a shock, Rick thought that the band had at least two more albums in them and after all, both he and Bruce Foxton were on the same treadmill.

They suggested that the band was put on hold for six months but Weller refused.

Later it became known that he had already signed up his new project the Style Council to Polydor.

The news was kept secret from the fans, there was still a tour to undertake, a tour which Rick believes was the musical pinnacle of the band’s career but at the end of 1982, they were no more after a final gig in Brighton.

“After the last show I just went home and sat there. I couldn’t think what to do, it was hard. It’s like losing your job, I thought what am I going to do now? It seemed a little surreal.”

To this day, unlike many others of that period, they have never reformed, Buckler and Foxton played together in the late 1990’s as From The Jam, Weller was invited to join them on stage, “nothing official” say Rick, but he “got the wrong end of the stick”, his answer, I am told was unrepeatable.

Eventually Rich himself realised that the venture was beginning to sound like a Jam tribute band and walked away himself saying that the enjoyment had gone out of it.

You get the impression that there is little love lost between the two,” once you fall out of Paul’s bubble’ you’ll never get back in it.” he tells me and despite both he and Foxton trying to stay in touch with the Modfather, it seems highly unlikely that the band will ever get back together.

It’s something that Rick finds hard to understand, none of the band members post Jam careers have ever hit the heights of those five years, so why wouldn’t you want to return to that

Rick gave up the music industry for a while, taking to restoring classic pieces of furniture, a cabinet maker he knew taught him how to do restoration and he loved it so much that he ended up doing it for ten years.

In 2015, he decided, to tell his story, hence the autobiography.It came out of the hoards of memorabilia from his days in the band . Rick also the website jamfan.net which includes an archive of gig lists, pictures and stories contributed by fans.

How to find the best betting sites for UK?